Well, that took rather longer than anticipated.  This has been a very strange year for everyone, me included, and the workload generated as a result in my day job has put a severe crimp on the time I’ve had available to devote to the stuff and nonsense that you will find documented here.  It is also clearly the case that the time required to capture, edit, process and upload video content to YouTube vastly exceeds that required to document the same process using static photography and the written word.  I am a victim here of my decision to produce a series of relatively ruminative videos that capture the process more or less in real time.  This slow pace is anathema to the usual YouTube style but that is how I roll and you can take it or leave it!

The upshot of all of this is that this snail-pace documentary series has taken 16 episodes and 5 months to complete, but complete it now is.  In keeping with the format of the previous entry, I will post links below to each of the episodes from 6 to 16, with some commentary attached that sets out key elements and my thoughts on the challenges and decisions made at each step and in some cases, highlight viewer comments and my responses.

Part Six:  In this episode, we take a closer look at the tricky business of removing, refitting and oiling Diafix jewels in Seiko watch movements. There are a number of approaches one might take to skinning this particular cat and this is mine. I make no claims that this is the correct or easiest method, but it is the approach that I seem to have settled upon that fills me with the least performance anxiety.  It is worth noting however that in choosing to use a soft implement to refit the springs (pegwood or bamboo), it is inevitable that you leave behind some debris.  However, as long as you clean up after yourself, that small inconvenience outweighs the greater risk of scratching or otherwise damaging the springs and surrounds if you choose to refit the springs using steel tweezers or other hard metal implement.  One of the comments on the accompanying Instagram entry suggested I might try profiled acrylic rod instead of wood.  I always welcome such suggestions and so have bought some 3mm acrylic rod to use next time I find myself grappling with Diafix settings.

Part Seven:  In this episode, we undertake the hazardous business of fitting the mainspring to the barrel.  I have documented this process numerous times in the past and won’t dwell on this in the commentary here other than to reflect upon the vexed question of whether and how much to oil the mainspring.  One of the commentators to the video asked why I had “greased up that spring as if it had to swim the British Channel”.

Reply:  “I’ve tried all sorts of different approaches to oiling mainsprings and barrels and seen quite wide variation in results. My default position has been informed by the instructions contained within Seiko technical manuals (which suggest “sufficient quantity” of oil to barrel base and the top of the mainspring and a thin layer to the whole of the barrel wall) and observing, as you [noted] the extent to which mainsprings are caked in grease from the factory.

A previously unopened mainspring barrel illustrating the very generous approach that Seiko took to greasing the mainspring in the factory.

I don’t claim to know what the best approach is, but this is one of those areas where if you ask the question of ten watchmakers, you get ten different answers ranging from none to “grease it up like a differential”.

You will see later on in episode ten how the completed movement performs in terms of amplitude and in consistency of time-keeping and, in the final episode, in terms of power reserve.  But there is no way to know whether a better outcome would have been achieved by say, not oiling the mainspring at all or by pre-oiling the spring before fitting, unless I disassemble the movement and try either of these, or other, approaches.   The two questions I have about ‘sufficient’ oiling, as Seiko defines it, are i) is there really a case to argue that this will actively impair any aspect of the watch’s performance in the short term? And ii) is there potential for such an approach to have a longer term negative effect?

Part Eight:  We begin the process of building up the movement main plate, starting with the setting parts, replacing the damaged clutch wheel, and then moving on to the centre wheel, its bridge, the cannon pinion and minute wheel. This sets the scene for the reconstruction of the going train in the episode to follow.

One of the comments from this episode asked: “Do you know what the logic is of going from the centre wheel to cannon pinion and minute wheel? I’ve worked on a couple different Seiko movements where it’s usually the whole train is finished on the movement side before flipping over and moving to canon pinion and minute wheel. I’m curious why the tech manual for this one recommends a different order.”

Reply (paraphrased): My feeling is that Seiko recommend this approach because it allows you to support the centre wheel bridge when fitting the cannon pinion, something that you can’t do directly once the gear train and bridges are in place.

Part Nine:  We continue building up the movement by fitting the barrel, gear train (escape wheel, third wheel and fourth wheel), click and ratchet wheel. In doing so, we note the operation of the hacking lever and check the free running of the gear train before moving on in the next episode to the fitting of the balance.

Part Ten:  In this episode, we complete the reconstruction of the going train and finally breath life back into this 54 year old movement.  In achieving this small but significant landmark, we encounter a damaged pallet stone, traverse the fitting and oiling of the pallet jewels, the oiling and reconstruction of the Diashock settings and the refitting of the balance. Towards the end of the episode, the initial performance of the movement is assessed in three positions with the aid of a timing machine.  A preliminary regulation achieves the following:

Comments:  “As you pass breezily over the nightmare of lubricating the pallet stones, you say “the merest smeer of 9415” then you flick through 4 or 5 escape wheel teeth to distribute. I assume it’s then another smeer before the next 4 or 5 teeth? Wasn’t quite sure. I think I have wildly over oiled the pallet stones in the past, and ended up removing nearly all of it with Rodico to get somewhere near the correct result.”

Reply: “Yes, one smear of 9415 per 4 or 5 pallet wheel teeth. I too have over-oiled pallet stones in the past, but the trick is to recognise and learn from mistakes!”

Part Eleven:  In this episode, we assemble and fit the autowinder mechanism and take a look at the operation of the Seiko magic lever system.

Part Twelve:  We now turn our attention back to the 62MAS recipient by removing the dial and hands from the previous 395-based movement fitted to this watch and assess what modifications we need to make to the calendar side of the 6216A donor movement to convert it from a day/date crown at 4 to date-only crown at 3.

Comment: “In testing the quickset, you provided the clearest example I’ve seen of why it’s a bad thing to try to use a quickset date too close to midnight. Thanks for that side benefit! Do have a question, though: I didn’t understand the relationship of crown position to date wheel printing. Is it possible to clarify that without a whole new video?”

Part Thirteen: In this episode, we finally fit the 62MAS dial and hands to the serviced 39 jewel Seikomatic 6216A movement. With that done, there is very little left to do on the movement and in the next episode we will be shifting focus and turning our attention to preparing the case to receive the new movement.

Part Fourteen:  Moving onto the case and we consider bezel options, our choice of crown, and set about removing the old crystal and replacing it with new.

Comment: “Can you explain more of your case/bezel cleaning process?”

Reply: “That depends on how dirty they are. If a full-on grunge-fest, then I start with pegwood to manually remove as much grot as possible.  If there is any surface corrosion, then I may use brass tweezers to remove as much of that as I can.  Once [this stage] is complete I will then immerse the casing parts in an ultrasonic bath and/or work on the case with a toothbrush/toothpaste/hot water.  A combination of all of the above will typically produce very good results. And on final assembly, Rodico putty can be used to remove any bits of dust and fluff that might have accumulated between main clean and assembly.”

Part Fifteen:  Having made the bezel and insert selection, we set about reluming the hollowed-out and now cleaned bezel pip and slowly but surely, we edge our way to completing this project.

Comment: “I like your idea of luming it from the top. In the past, I stuck down some cling film or tape in front and did it from the back. I’ve also first done a layer of clear epoxy, then followed by lume from behind.”

Reply: “On these bezel inserts there is no choice but to lume from the top because the hole is not a hole but a bowl! And 62MAS lume pips were never covered by a clear film or epoxy. They were just unprotected lume.”

Part Sixteen:  Home and dry.  In this sixteenth and final episode, we complete the assembly of the case, tailor the stem, fit the movement, grease gaskets and seal it up. The episode concludes with a reflection on the project as a whole, the challenges of documenting the process on film and a comparison with a purist’s 62MAS.

YouTube content will continue to feature in the future, but you will see my focus shift back towards the blog in 2021, assuming of course that we are not all consumed by plagues of locusts, alien invasion, asteroid collisions and so on and so forth.  But let’s be optimistic.  A good riddance to 2020 and some hope and expectation that we see better things in 2021. 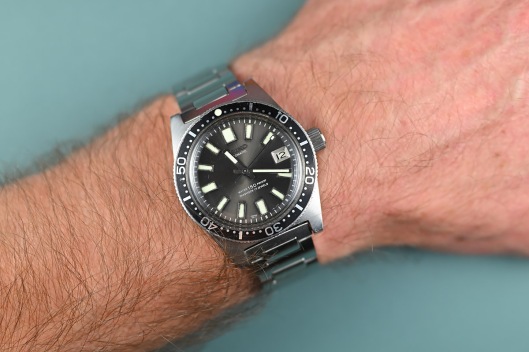