The underlying philosophy of Seiko’s movement designers towards the end of the 1950’s appears to have been defined to some extent by the maxim that bigger is better.  The up-sizing of the 23.7 mm diameter Seiko Super to the 25.6 mm Seiko Marvel in 1956 allowed the designers room to exploit the benefits of larger gears, mainsprings and balances, resulting in a movement with smoother transfer of higher levels of torque to a balance wheel more resistant to external influences.  The result was a movement with greater accuracy, consistency and stamina.  The next step in the major developmental cycle was, in a sense, to rinse and repeat.  Seiko’s developing ambitions to produce a properly high quality, higher end watch would be better served by an even larger movement that could accommodate a larger balance wheel to improve isochronism and a larger barrel to accommodate a higher torque mainspring. The result was an up-scaling in 1959 of the Marvel movement to the 12½” (27.6 mm) Seiko Crown.

The two steps charting the transformation of the Super into the Marvel and the Marvel into the Crown can, in a very loose sense, be thought of as analogous to one species evolving into another.  In nature, that transformation may require, say, a thousand generations to achieve but in the evolution of the watch movement, generational development is trapped within the confines of the underlying architecture and dimensions of a particular calibre.  The Marvel itself underwent some refinement with the introduction of shock protection for the balance, changes in the level of jeweling and other minor changes; it then underwent further refinement in siring the Lord Marvel which replaced the fixed stud holder with moveable, permitting on-the-fly adjustment of beat error.

The overall level of finish also saw a pretty substantial improvement between the two, sign-posting a direction of travel that would eventually be realised in the first Grand Seiko.  But those generational changes ultimately ran into a wall.  In order to evolve into a new horological species of sorts, the shackles needed to be thrown off, at least in a dimensional sense, for it is the latter that provides room to exercise the design freedoms required to make that next step change in quality.  And so, in the Crown, we have a significantly larger movement but one that retains much of the essential genetic code of the Marvel.

The example of Seiko Crown that features in today’s episode requires a degree of forensic archaeology in order to piece together some sense of what it was at its creation.  As with the Marvel we covered in the previous post, we start with just a fragment or two of the original whole. 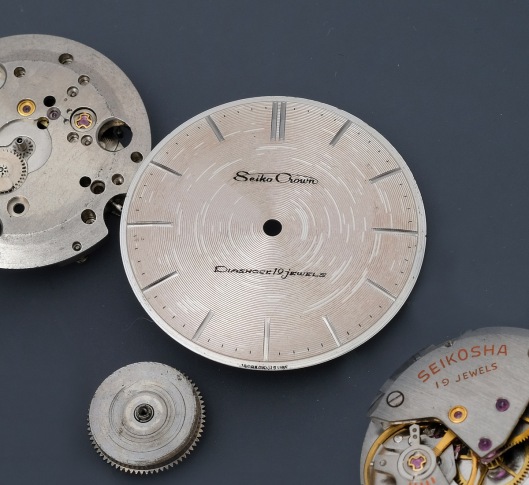 Although we have a dial, some hands lurking around somewhere and a couple of part movements, my box of bits had not produced a case and so a bit of detective work was required to identify the correct case and then to set about finding a candidate.  Some determined sleuthing suggested that the case reference for this dial might be 15002 and £13.20 and a week or so later and I have myself a complete stainless steel case, crown and movement. 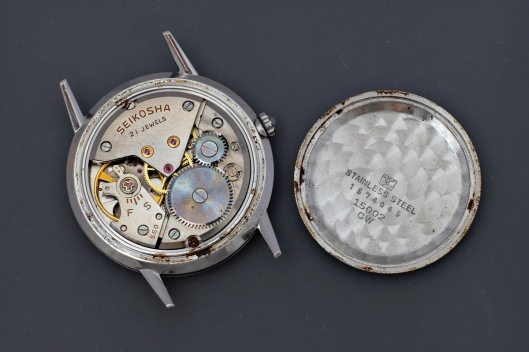 The first job is to release the movement.  This requires first removing the bezel from the top, removing the two case screws, one of which badly corroded, and loosening the setting lever screw to facilitate removal of the crown and stem.

You may have noticed that the serial number on the case back dates this example to 1961 and the movement is a later 21 jewel example of the breed, equipped with Diafix settings top and bottom serving both the escape and third wheels. 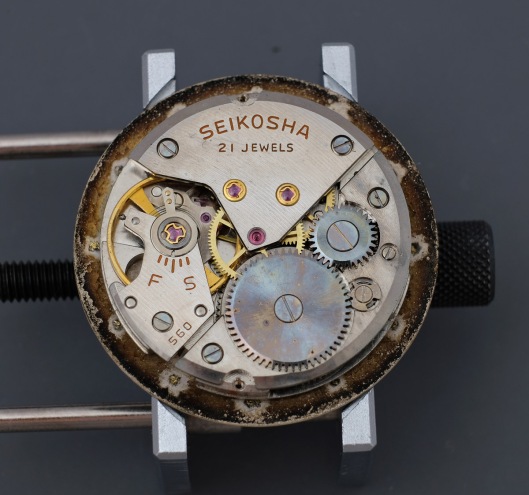 Aside from some minor tarnishing this movement looks pretty sound and so, in spite of the fact that I already had a couple of earlier 19 jewel examples, I resolved instead to keep faith with the movement that came with the case.  However, with the (very tatty) dial removed, all is not entirely well, dial side.

There is some serious corrosion affecting the interfaces between seconds hand pinion, cannon pinion and hour wheel with the combined effect that the hour wheel refused all attempts to persuade it to part company with its nearest neighbours. 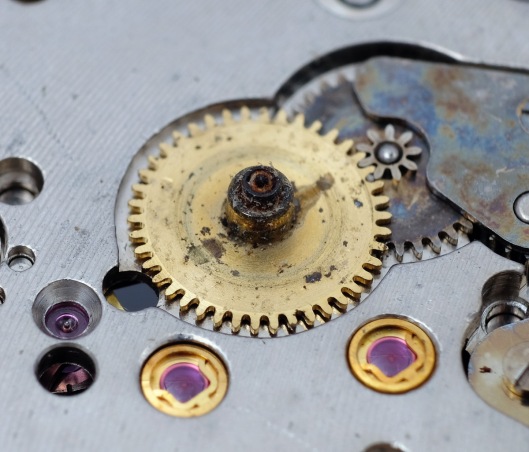 It’s not often that I reach for the WD40 when working on watch movements, but this seemed like an appropriate occasion.

I left it for 20 minutes or so to penetrate and do its thing, and then, following some determined jiggling, I was able to release the hour wheel from the grip of those parts beneath.

There is nothing more to be done from this side until the balance side is disassembled.  I worked through that process smoothly until I got to the point of attempting to remove the centre seconds wheel.

Nothing I could do would break the grip of the solid plug of corrosion holding the centre seconds pinion fast within the centre wheel pinion.  In the end, my efforts only succeeded in persuading the fourth wheel to part company with its pinion.

Although the centre seconds pinion and centre wheel pinion were seized together, I was able to release the centre wheel from its bearing as a single unit, complete with centre wheel bridge.  I then immersed the whole lot in some WD40 and left it to its own devices for a while.

Eventually I was able to separate the seconds pinion from the centre wheel but considered both now write-offs.

I was not at all concerned by the loss of these parts because I had a good stash of potential replacements from the two spare part-movements that came with the haul from which this particular project has been farmed.  At this point, all of the useable parts from this movement plus replacement parts where required, found their way into the cleaning machine.

With everything clean and dry, we can begin reassembling the movement, starting with the Diafix settings on the main plate and the setting parts.

As noted earlier, the centre wheel jewel was sitting too high in its hole and needed adjustment.  A little work with my Seitz jeweling tool has it sitting once more at the correct height.

Adjusting the centre wheel jewel: before (left) and after (right)

With that done, we can fit a new centre wheel and bridge.

The mainspring was in very good shape and so after a good clean, I refitted it to the barrel. 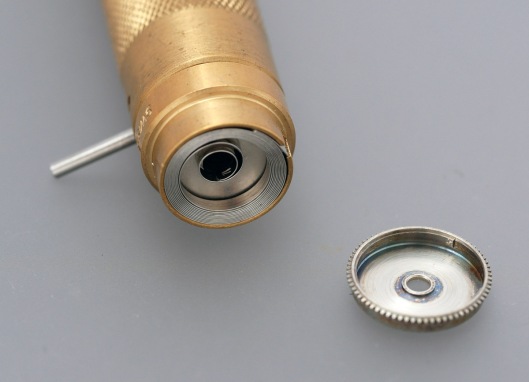 With that done, we can proceed with the reconstruction of the gear train, complete with new centre seconds wheel.

The rest of the rebuild proceeded without notable incident other than a slight difficulty winding in full power into the mainspring.  This derived in most part from the small slippy crown rather than any inherent stiffness.  Anyway, with a full wind, the movement wakes and establishes an easy rhythm, entirely free from any beat error and with a very good amplitude.  No messing about with hairspring collets with this one, in spite of its fixed stud holder.

The original hands for this watch were lurking among the detritus salvaged from the bits box and with a clean, we can fit the dial and hands to the movement and turn our attention to the case. 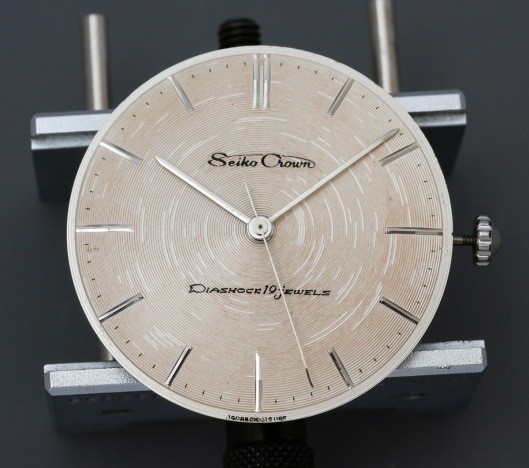 The case comprises three parts:  the midcase, the press-fit case back and the bezel.

The acrylic crystal is designed to sit within the bezel, held in place by the external pressure exerted by the relaxation of the compression required to seat the crystal in the bezel.  Consequently, when sourcing a suitable crystal, you need to select one that is about 0.2mm larger than the diameter of the inner circumference of the bezel.  But because the crystal is too large, you need to compress it in order to get it to fit.  This requires a crystal lift. 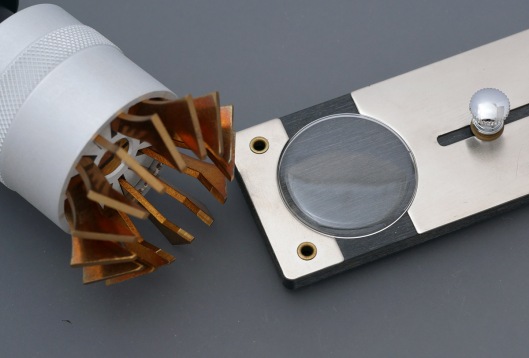 Place the crystal onto the bezel, and release the pressure by unscrewing the knob on top of the lift, at which point the crystal will release some of its potential energy and find itself securely bound by the bezel. 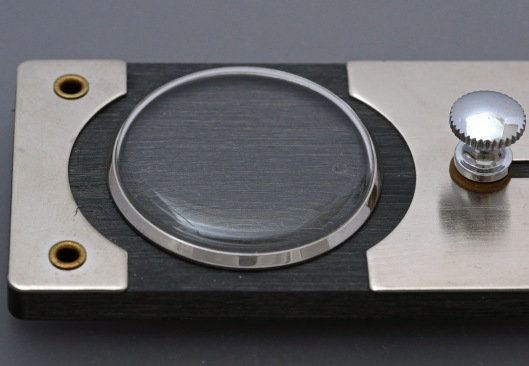 We can now lower the movement, fitted with its dial and hands, into the mid-case and secure it there by tightening up the case screws to the rear.

This requires a certain dexterity to achieve without calamity, far less straightforward than fitting a movement to a conventional rear-loader.  Once the movement is in the case, we can fit the bezel/crystal to cap of the top.  You can frequently accomplish this on these watches just using finger pressure, but on this occasion, I used a crystal press.

Unlike the Marvel in the previous post, this watch boasts a degree of waterproofness insofar as the crown is fitted with a gasket.  However, this watch being two years shy of sixty years old, the gasket is good for nothing and needs to be replaced.  The crown uses a washer to encapsulate the gasket and so some determined digging and cleaning is required to extract the old gasket prior to refitting a suitable replacement.

With that done, we can survey the movement from the rear of the now complete watch.

This is undoubtedly an attractive package.  A supremely coherent design as free from foibles as one could reasonably hope and an excellent basis on which to push on towards the creation of something really rather special in the first Grand Seiko.  We complete the deal by refitting the case back.

Select a suitable strap, stand back and admire. 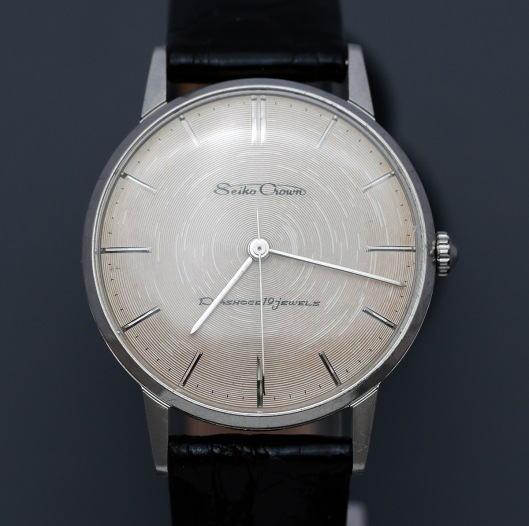 In spite of the improbable starting point of this one, the dial and hands have stood the test of time remarkably well and in partnering them with a very sharp case, we have ended up with a really rather smart watch.

Its larger size, dominated by its dial, has resulted in something that has a very different personality compared to the Marvel.  I like them both but somehow the older watch has a little bit more warmth to its personality.  Nevertheless, this has been an interesting experience for me in that it has provided an insight into Seiko’s transition from a watch producer, combining elements from internal and external sources, to a fully integrated watchmaker.  In this respect, Seiko had become, and remains to this day, quite remarkable. 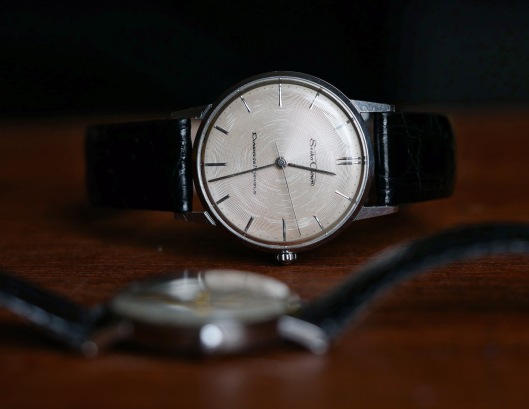