The problem with true collector’s examples of any desirable vintage watch is that they can tend to spend very little time serving their intended purpose, relegated instead to a display case, a safe or a nice aluminium storage case from Maplins. Let’s face it, mint is a bit dull. It can be beautiful, but can lack the personality of a watch that shows its history.  To further this argument, I’d like to submit Exhibit (a), a Seiko 6105-8000 dating from March 1970. Perhaps a bit on the late side for a proof/proof but that’s what it says on the back. This one I bought from an Australian seller who sold it to me as a parts project, together with a few other bits and pieces, including a new crystal. I had entertained thoughts of making some sort of GMT hybrid out of it, the 6117 being essentially a 6105, but that would have required a lathe to modify the rear of the dial, and I don’t have one of those. And anyway, when I received the watch, I liked it and felt it would be fairer to try to bring back some, but not too much of course, of its former glory. Here it is in the state received:

You will notice the trashed crystal, the faded insert, and the tell-tale signs that moisture has gained entry at some point in the past – some minor corrosion to the indexes on the dial and, darkened, moldy lume. And the eagle-eyed may have also noticed a missing date wheel. Oh and the auto-rotor appears completely disengaged from the winding mechanism. A few dents here and there too. Removing the movement, dial and hands and we can get a better look at all three; the calendar side of the movement with date wheel missing:

and the dial and hands looking a bit sad:

with what appear to be scratches on the dial surface in addition to the grotty indexes. The other issue with the dial is that one of the dial feet is missing, replaced instead with solder remnants from previous attempts, I presume, to reattach a/the foot. 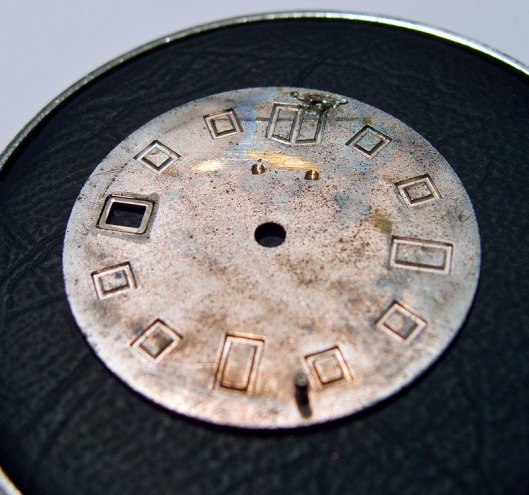 The shot above gives a nice view of the way in which the indexes are formed. No applied markers for Seiko in the 1960’s. The generally poor condition of the movement persuaded me to retrieve a 6105 dress watch I had been saving for a rainy day and to use its movement as a replacement. The dress movement looked in nice condition but was a non-runner for reasons that become apparent as the disassembly begins. With the auto-winding bridge removed we can see that the movement appears dry, with plenty of dirt in evidence:

Further in, more dirt/congealed grease or mainspring oil surrounding the barrel hole in the mainplate: 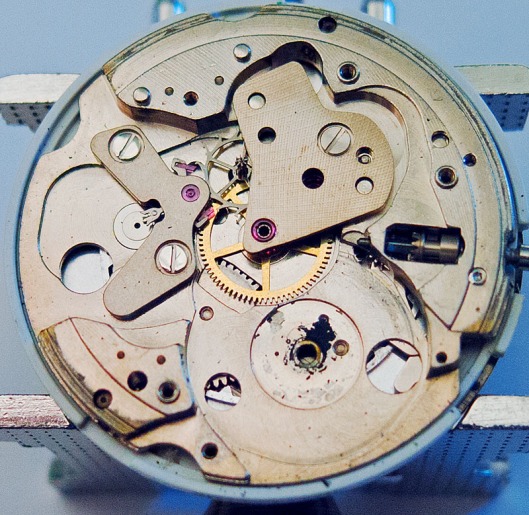 Servicing these movements is straightforward and I encountered no problems at all – it just needed a jolly good clean and oil. Here it is coming back together: 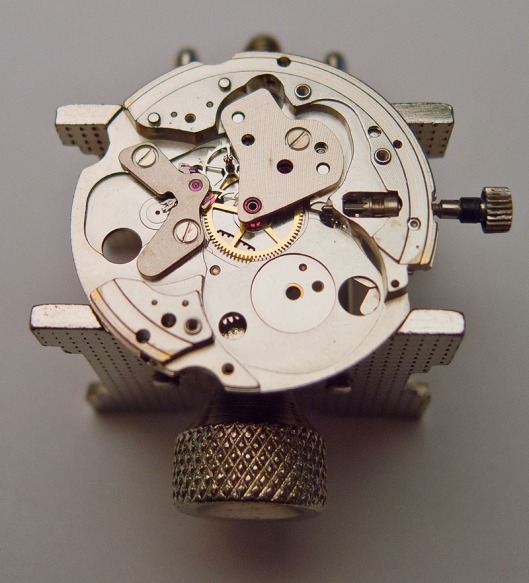 looking a bit fresher than the ‘before’ shot above. Meanwhile, I had been in touch with a UK-based leather strap maker James Hyman (http://db10straps.tumblr.com/ ) and dab hand in the lume department and discussed with him relume options for the dial and hands. In the end we settled on a slightly creamy, vintaged lume, with a matt, grainy texture in keeping with the original, avoiding pillowed lume sometimes seen in 6105 relumes where the centre sits higher than the edges. James completed a first class job over a weekend and as a bonus somehow magicked away the ‘scratches’ on the dial. Here’s the dial back on the, now mostly completed movement, together with hands in place: 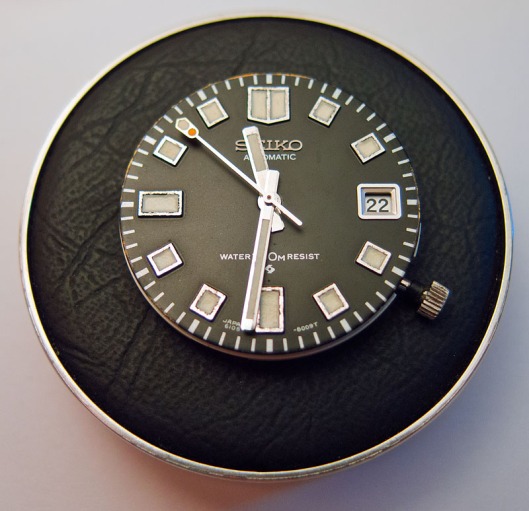 I had used some small bits of sticky dial pads to secure the movement spacer to the movement at the 12 position and then the dial to the spacer – just to keep it that bit more secure, with only one dial post still doing its job. While James had been working on my dial and hands, I had cleaned, and refinished the case. Here it is with the new crystal fitted (just look at that thing!)

The crystal incidentally is one modeled on the very first versions of the domed crystal fitted to these watches, having an inner dome and a flat top and standing rather more proud of the case than the later, more modestly proportioned, double domed crystals. With the movement back in the case for a test fit 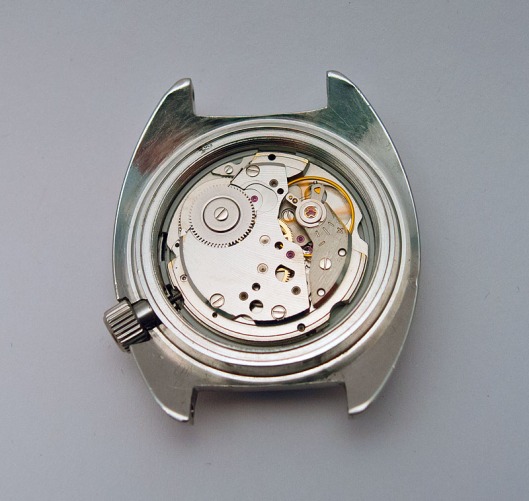 we get a view of how she looks: 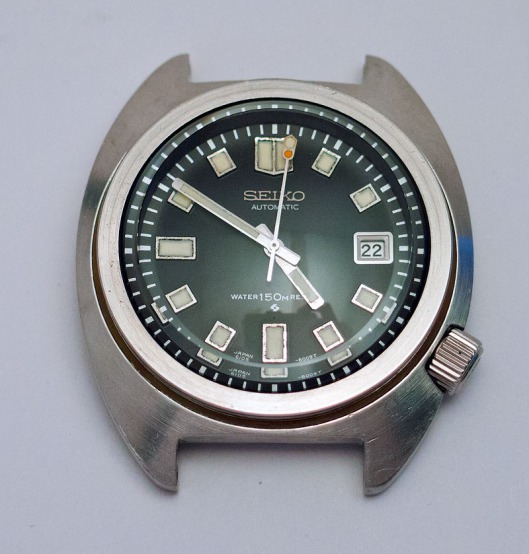 Not bad. Next up, we need to refit the bezel, the pip of which I had relumed with some lume James had very kindly sent me when he returned the dial. Here it is ready for its refitting.

The retaining spring looks like something someone has knocked up in the past from a bent paper clip, but in fact this is how they are supposed to look and this one is almost certainly the original spring. But let’s fit the automatic winding mechanism first:

before completing the job:

On with the inevitable NATO, 19mm rubber tropics all otherwise allocated, and we’re there: 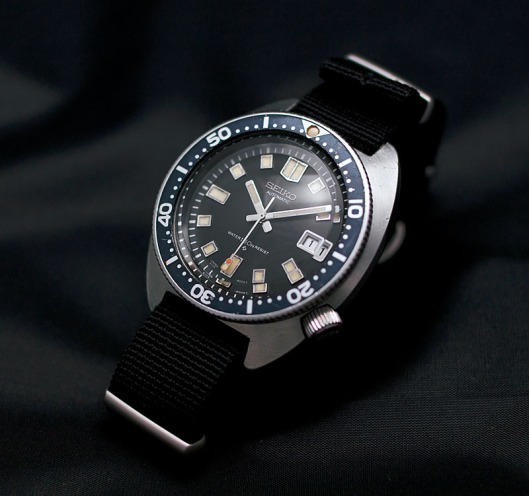 * Mint, in the current vernacular of 11 year old boys, apparently means something like ‘nice’ or ‘cool’ but not necessarily perfect, spotless, undamaged.