Shortly before finding the elusive ill-described 62mas featured in a previous post (here), and which I’d been holding out for for months and months, I bottled it and went for a decent-looking example sold through the Seiko-Citizen trading forum.  The price was fair but by no means the bargain that I snaffled a week or two later.  When this first watch arrived, it was clear it was sound, but not top tier:

The dial and hands were corrosion free, but dirty, the lume discoloured and powdery, 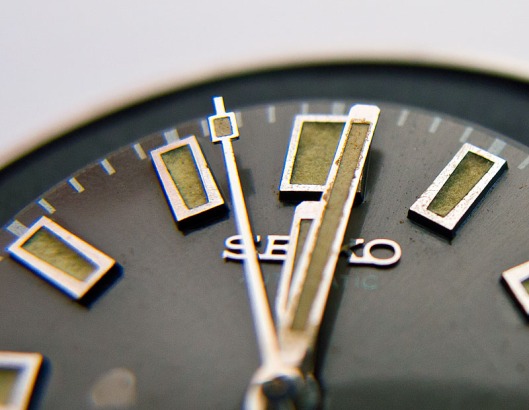 but the case was tidy and the watch appeared to run reasonably well.  The movement looked ok, a bit grubby, but kept decent time and all functions operated as advertised.  So, I was content initially to use it as intended with no more than a quick case clean inside and out.

With the other project complete though, the grubby dial on this one started to grate and I decided to give it the full treatment:  a movement service and the dial and hands off for a relume. First things first, out with the movement, off with the dial and appraise the dial side of the movement:

You can see from this shot how grubby it is.  It’s clear that, in spite of how well it appeared to be running, it’s been some time since it last saw a service.  For reasons which I’ll elaborate more on later, I had been thinking about using a 17 jewel 6205 as the basis of a rebuild, the 6205 being a dress movement and generally a notch or two higher in quality than the more workmanlike movements used in the dive watches.  In fact, 6205’s are more commonly found in 24 jewel guise, but the one I had to hand was 17 jewel so a slightly more conservative choice for this makeover.  Here’s the donor:

And, with the movement out, dial and hands removed, we can compare the rather cleaner donor on the right with the original on the left: 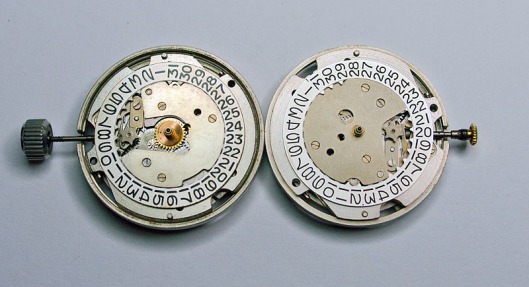 Not a great deal to choose between them.  The most obvious differences at first sight being the calendar plate in the centre which sits over the hour wheel on the 6205 but leaves it exposed on the 6217, the latter having to make do with a film washer to keep the hour wheel in place.  The edge of the main plate has a chamfer running around its outer edge on the 6217 which makes it look a little smaller – but this is an illusion.  We’ll come back to one more difference in a bit when we start to dissemble the movements.  Decision made then, I opted to service the 6205 and substitute key parts from the 6217 to keep the spirit of the original intact.

Here then is the top of the 6205, automatic winding mechanism and ratchet wheel removed, exposing some of the grime emerging from the barrel: 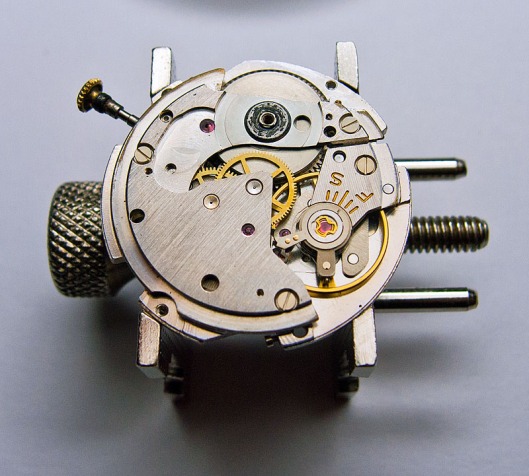 So in spite of the much cleaner appearance of this one, it clearly does need a clean and fettle.  The service itself was entirely uneventful and so rather than dwelling on that in any detail, perhaps we can pause to look a little more closely at the differences between the 6205 and 6217, starting with the calendar side with both movements oriented in the same way to aid comparison.  Spot the difference:

Apart from the fact that the 6217 (left) is still mounted in its movement ring, the differences really are subtle.  The main plates are essentially the same, differing in large part only in the finishing:  the chamfer around the edge of the 6217 mainplate and around the pallet fork jewel hole on the 6205 being obvious differences.  However, there is one minor but significant design difference between the two which tipped me over into using the 6205 as the basis of the service.  If we remove the small minute wheel retaining plates on both movements, and flip over the minute wheels, we can see that they are seated quite differently:  The 6217 has a circular raised lip on its underside that sits in a hole in the main plate whereas the 6205 has a recess and hole in its centre and sits upon a small shaft.  The photos below compare a 6217 on the left with the 24 jewel version of the 6205 on the right (which shares its minute wheel design with the 17 jewel version):

The minute wheel on the 6217 is designed in this way because it incorporates a pinion on its upper side to drive the 24 hour wheel in world time models that use the 6217 movement.  In the absence of such a requirement in this application, it seems like a cruder design to me, born out of compromise.  In the 6117 world time watches, the 24 hour wheel is driven by the intermediate date wheel, which seems to make better sense in any case and permits a design for the mounting of the minute wheel that does not have to allow for a dual role.  With the 6205 cleaned and oiled, we can compare the top side, up and running happily with some power wound into the mainspring: 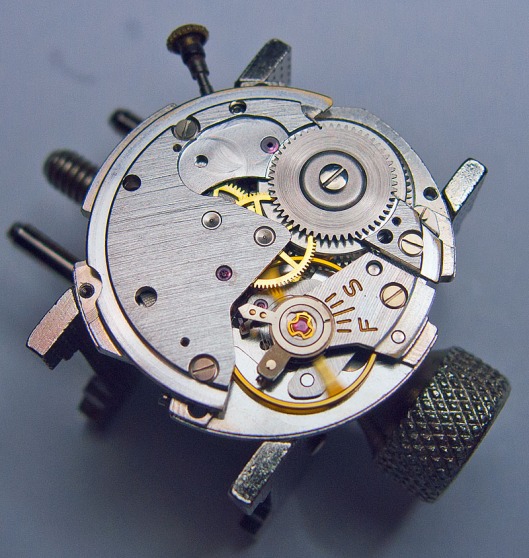 In looking for differences between the two, we can see a jeweled bearing in the centre of the train wheel bridge of the earlier 6217 where none exists in the 6205.  This is odd.  They are both supposed to be 17 jewel movements, yet there appears to be at least one extra jewel on the 6217.  But then I remembered that the older watch came fitted with a 24 jewel rotor.  At the time, I assumed it was just the rotor that had been substituted and being none the wiser, did not appreciate the significance of the extra jewel on the train wheel bridge.  The other watch must therefore have had both rotor and train wheel bridge substituted from a 24 jewel 6205 during a previous service.  That mix-up only goes to further illustrate the close similarities between the two movements.

With that mystery solved, let’s move on.  With the case now cleaned, I opted to substitute a new bezel insert in place of the scruffy original:

The bezel snapped crisply into place, and the new insert pressed into position, requiring a little sizing to get it to seat:

The movement is now ready to receive its dial, freshly back from its relume in vintage yellow lume courtesy of James Hyman.  Here’s the dial side of the movement, with the 6217 calendar plate and hour wheel fitted 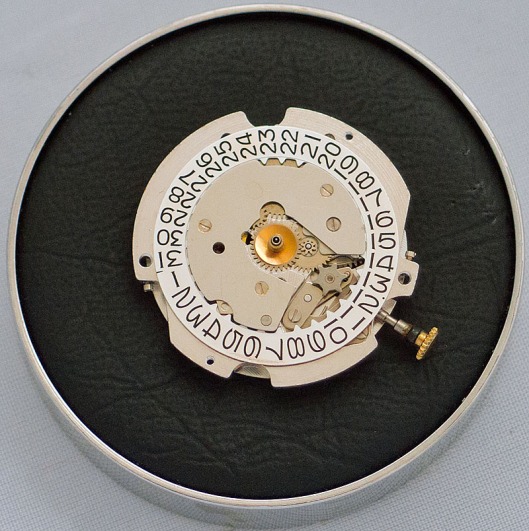 Dial on together with movement ring:

Hands fitted and the whole lot popped back into the case: 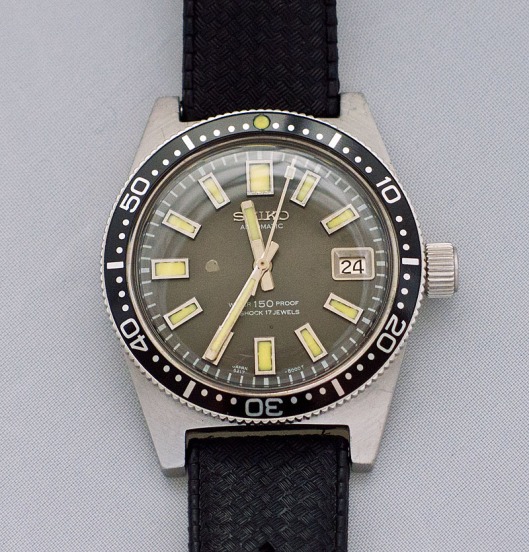 A look to the rear

Before attaching the autowinding mechanism from the 6217 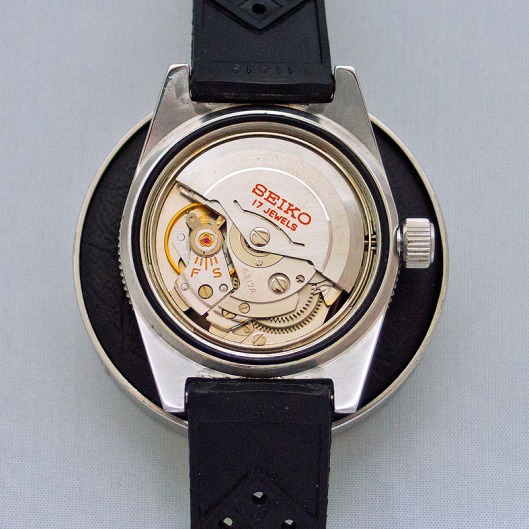 Time for a finishing shot or two of the completed watch