In flagrant violation of my self-imposed rule not to buy watches with lug widths larger than 20mm, I find myself in possession of a Seiko 7548-7000 dating from June 1982 (22mm in case you were wondering). My excuse is that the bid I submitted was not entirely serious but ended up winning the auction, probably because other potentially interested parties were put off by the watch having been described as unresponsive to the fitment of a fresh battery. I confess too to a certain fondness for the model, largely because my first semi-serious attempt at a watch refurb was the fettling of a pepsi variant of the same (see here). It is also a watch to be respected because its design was born from the tail end of a golden period of creativity for Seiko and, as a result, it is a watch whose quality shines through, unencumbered by the air of penny pinching evident in the second generation 6309 automatic diver’s watch introduced three or four years later and with whom it shared its case design.

The auction photos suggested that this particular watch was in tip top nick, non-functioning movement notwithstanding, and with it in hand, that impression is not undermined.

For sure, it is a little dirty but it looks to have been very well cared for over its 33 year life time, with the dial and hands in particular looking super, the bezel original and only sporting a few minor scratches and the crown and case tube still in possession of the full quota of thread. With a movement as potentially accurate as this robust old quartz, it is perhaps not surprising that previous owners might not have had cause to undo the crown very often.

It doesn’t look either that this watch had seen much watchmaker action: the case back shows two dimples on its timeline indicating battery changes in 1985 and 1991

although, any since 1994 would not have appeared on the case back, I suppose. Still, the movement looks clean with only some tarnishing to the model number plate on the green circuit block betraying the watch’s age.

The battery is missing from this shot but when I received it, one was fitted and the watch not running, as advertised; a substitute yielded nothing in the way of meaningful action either. Its non-functioning state was enough to prompt me to pick up a very cheap but working 7546 quartz watch from eBay to farm for parts as required (I was thinking at the time that the coil was probably shot).

Slipping the movement out of the case and the dial looks every bit as good as hinted at from the exterior view, barring a slight mark to the left of the 5 marker. 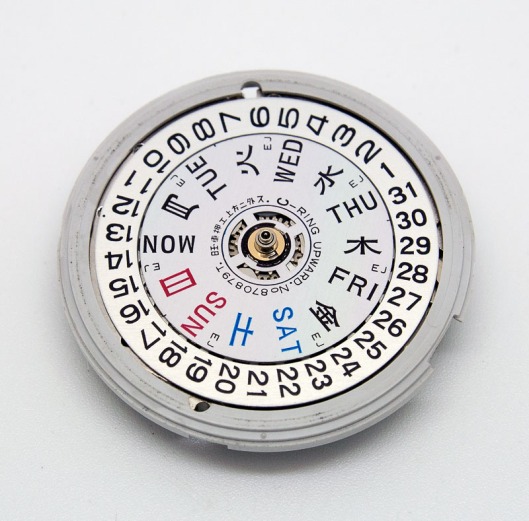 with pretty much everything looking essentially mint. The resistance offered up by the hands when I removed them suggested that this is the first time anyone has gained access to the movement innards since 1982. I’ll skip the breakdown of this side of the movement as we’ve been here before with the 6309 (see here, for example) and concentrate instead on the relative unfamiliarity of the train and circuit side.

The layout is pretty conventional with the train wheels and bridge sat in the centre, the coil at the bottom and the quartz oscillator and circuit hidden on the reverse side to the left. The gold coloured screw to the right of the movement nameplate is a trimmer condenser, used to regulate the timing of the movement.

The green circuit block is secured by four screws, two of which also secure the battery-holding spring. With it removed and turned over we can see the quartz oscillator and reset pin, the latter coming into play when the crown is pulled out to the time-setting position.

The removal of the circuit block allows access to the coil and train wheel bridge.

A slight hiccough follows because, having removed the crown with it in the time-setting position, the second setting lever (effectively the equivalent of a hacking lever) is sitting snugly against the fourth wheel, making extraction of any of the train wheels ill-advised. 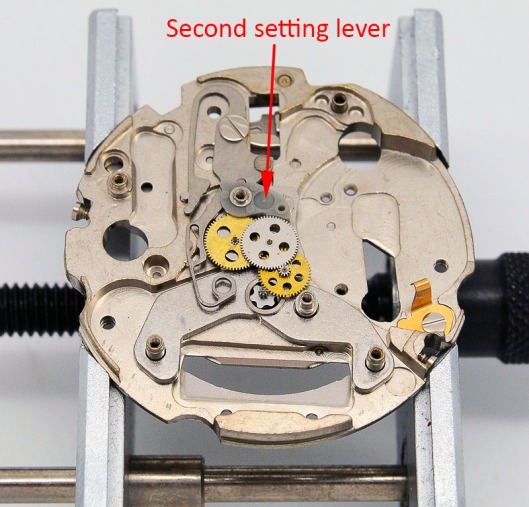 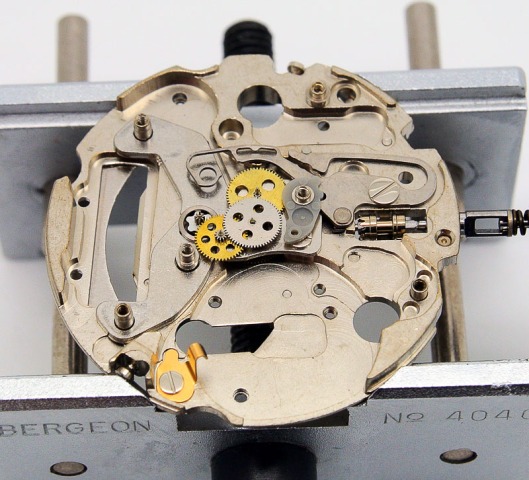 permitting the removal of the train wheels and providing access to the centre wheel bridge.

The tarnishing of the model number plate on the circuit block was something I wanted to sort during the cleaning process. Obviously, attempting to clean it in situ is inadvisable but it is easy enough to remove by pushing the securing tabs from the rear.

Following cleaning of all of the non-electrical movement parts in the watch cleaning machine, reassembly proceeds as follows: First up, fit and lubricate, as required, the clutch and stem followed by the setting lever, yoke and setting lever spring. 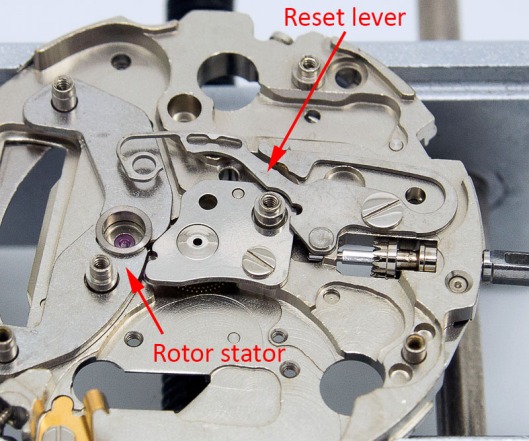 The contact of the reset lever with the reset pin stops the output signal from the circuit block but maintains current to the quartz oscillator so that it is ready to start again when the crown is pushed back to the normal position.

The remaining steps in the reassembly of the movement are straightforward but in taking them, we need to test the function of the original coil and circuit. So, first refit the original coil and anti-magnetic shield followed by the circuit block, now reunited with the cleaned model number plate.

I secured the circuit block with a pair of screws borrowed from that spare 7546 movement because I did not want to refit the battery securing spring just yet. Pressing a fresh battery into the battery holder and I was relieved to see the movement spring into life. It looks as though it was just dirt and dried out lubrication that was preventing it from operating rather than any faults with any of the electrical components and so for the moment, that 7546 can breath easy.

Moving back to the calendar side, reassembly appeared to have gone smoothly but when testing the operation of the setting and quickset, I noticed that during the time setting operation, the rotation of the setting wheel was dragging the day/date correcting gear across to the intermediate day correction wheel, mounted on the minute wheel bridge, causing the latter to rotate. With the day wheel fitted this would result in the day wheel rotating inappropriately during the time-setting operation. 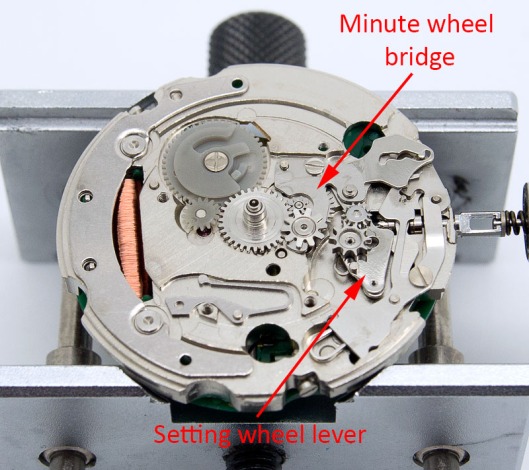 The reason it was doing this was that the setting wheel lever was not sitting low enough against the movement with the result that the underside framework was not staying hooked over the pin on the main plate (illustrated below in a photo of a spare 6309), thereby allowing the whole shebang to drag to the left.

Attention now turns to the case. The usual breakdown into constituent parts

is followed by a thorough clean. Out with the old gaskets and crystal 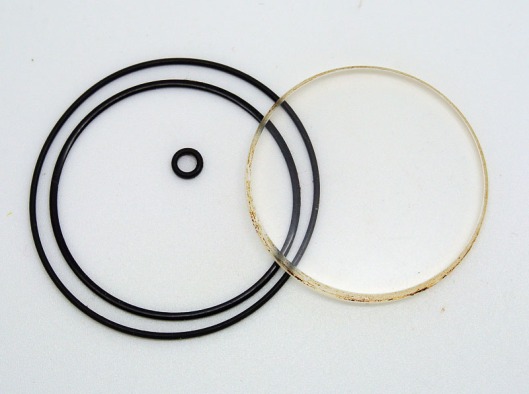 and in with the new, together with a fresh battery.

With the dial and hands refitted to the movement and the battery retaining spring back in position, it is time to fit the movement to the case,

close up the case back and turn over 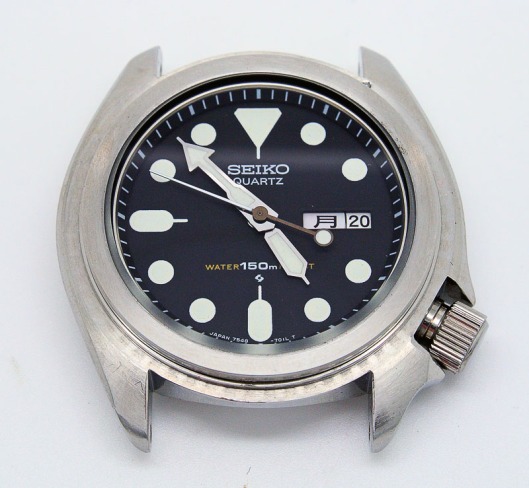 before refitting the bezel. 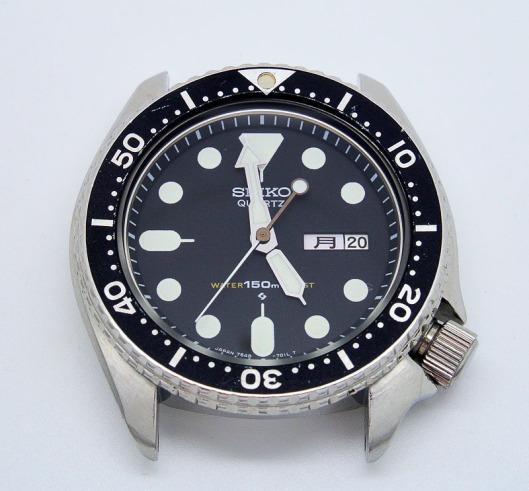 and so with a modern equivalent secured (4FZ0AZ), we are all set to wrap this one up.

All that remains is to check the timekeeping and regulate as required. In this case, the watch was running a little fast for the first day or so but an eighth turn clockwise to the trimmer condenser and the watch has lost just under a second in the past 5 days, well within the specified accuracy of 15 seconds gain or loss per month. Let’s conclude with a wrist shot on the new strap.