Regardless of the overall effort that may go into the refurbishment of a watch, the greatest visual impact is perhaps achieved through the substitution of a scratched, scuffed or hazy crystal with one through which the face of the watch can be viewed unimpeded. Clarity of view though is not the only factor that comes into play. Just as the choice of strap can completely transform the character of a watch, equally, the choice of material and profile of a crystal can have a profound effect on the personality of a watch. The Rolex 1680 Submariner owes a great deal of its period charm to the box acrylic crystal standing so proud of the bezel: the modern flat sapphires seem soulless by comparison. 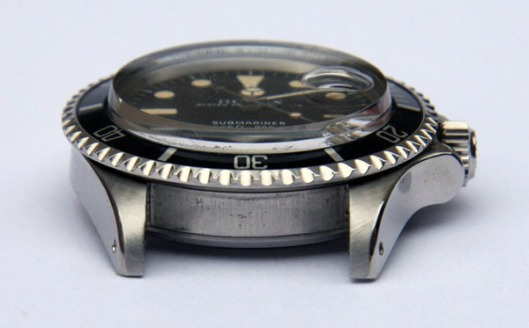 Similarly, aside from the iconic asymmetric case, the Benrus Type I and II military divers watches owe much of their visual appeal to their wonderful domed acrylic crystal, forming a perfect parabola incorporating the launching and landing pads defined by the slope of the bezel insert.

As we’ve recently been spending some time with the Seiko 6105, I thought I’d take a tour around the various options currently (or not) available to replace tatty examples of the original Hardlex single or doubled-domed crystal fitted to both generations of 6105 divers watch.

Just as with the examples mentioned above, the look of the 6105 is defined to a great extent by its crystal: its inner dome provides an intriguing angle-dependent optical effect on the view of the dial: the more oblique the angle of view, the more the dial appears to curve downwards at its furthest edge; the top of the crystal stands proud of the bezel with bragging rights seemingly associated with the breadth of the gap between the sharp outer edge of the crystal top and the inner edge of the bezel insert.

According to long-standing independent Seiko parts supplier, Jonathan Koch (now sadly no longer with us), Seiko used three different versions of the 320W10GN crystal: the first edition, which Jonathan called the Type 1, was the tallest and featured a single inner dome and a flat top. This version was reportedly fitted to the earliest 6105-8000’s but its resulting vulnerability to damage meant that subsequent versions had a lower profile, with the third and final iteration featuring a marked outer dome as well as an inner dome (Jonathan’s Type 3).

Original Seiko service replacements are very thin on the ground these days but the popularity of the 6105 has encouraged third party manufacturers, including Mr. Koch, to supply facsimile’s of the Seiko crystal, both in mineral glass and, increasingly these days, in sapphire too. Over the years, I’ve used 7 or 8 different third party crystals from 6 different suppliers, as well as one or two original Seiko crystals farmed from other Seiko watches that use the same crystal. Currently, in my arsenal, I have two original crystals and 5 different types of third party examples and so let’s take a tour through some of these, most of which are still available to buy.

In the photo below, the weathered original taken from the 6105 described in the previous post sits at the hub, with a sapphire at 12 and clockwise from there, the East Tech Type III (Jonathan Koch), another Seiko original, a generic and finally at the 10 position, the East Tech Type 1. Later on we’ll also take a look at another sapphire, no longer available.

It’s probably best to start the ball rolling by taking a look at a decent example of a Seiko original 320W10GN, taken from a 6106-8237, next to its weathered sibling:

The two crystals are essentially the same, with sharp edges, a tall profile and a marked inner dome and a very slight outer dome. My guess is that these are both Type 2’s, the version fitted to later first generation 6105’s and as well as the second generation watches. Here’s a view with it fitted to a 6105-8000:

You should be able to see that the crystal stands taller than the bezel insert and that there is quite a gap between the crystal edge and the insert, both features which to me define quite a bit of what I like about the 6105.

Next, let’s take a look at the lowest common denominator, a thoroughly non-descript, vanilla generic glass crystal, sold as a 320W10GN00:

This is taking low profile to the point where the crystal serves no purpose other than filling the gap in the hole in the case. Yes, it has an inner dome, is of the correct diameter, and beveled edges but when you see it fitted

you can see that it actually sits below the bezel insert and has the smallest gap to the insert edge of all of the crystals considered here. For me, this is a non-starter and I would not recommend its use, other perhaps than as a replacement for the standard crystal in a Seiko 6309.

Next, in order of increasing profile, we have: the East Tech Type 3, made from tempered mineral glass (Hardlex is Seiko’s scratch resistant tempered glass material)

Clearly not as tall as the original, but when fitted to the case

we can see that the top of the crystal eases above the level of the bezel insert whilst the characteristic gap to the insert edge is now large enough to assert the characteristic appearance of the 6105 crystal.  This crystal has a marked outer dome too which serves to limit the optical reducing effect of the flat-topped crystals.

A change in material now and an example of a higher profile sapphire crystal available quite economically from an Ebay seller based in Hong Kong. You can order with or without anti-reflection coating. Mine came with but I chose to remove it subsequently:

You can see from the photo above that this one does quite a good job at duplicating the profile of the Type 2 original but the taper of the bevel to my eyes is a little too great, resulting in a smaller diameter top than the original. In terms of finish, I felt the edges a touch too soft and, with all sapphires in this double-domed design, somehow the view to the dial, counter-intuitively, is not as clear as the mineral glass crystals. I suspect that this is because the different refractive index compared to glass creates more internal reflections when viewing the watch directly from above. Here it is fitted:

You can see how the smaller diameter top results in a much bigger gap to the bezel insert edge than with the Type 2 original shown earlier.

And finally, let take a look at East Tech’s Type 1, the tallest of the lot and the only one with a completely flat top:

Clearly taller than the Type 2 but a slight bowing to the bevel creates an s-shaped aspect to the appearance of the inner dome viewed from the side.   In situ, it makes quite an impact:

Wowzer. This is the crystal I fitted to the 6105-8000 featured in the ‘Basket cases have more soul’ post (here). I like it because the combination of its height, the inner dome and the flat top has an optical reducing effect which serves to disguise to some extent the slightly ropey cosmetic condition of the dial fitted to that watch. It is not a mainstream choice though but a good one if you want to reproduce the look of the very earliest examples of the 6105-8000.

So, what’s the verdict? Well, I think the default choice has to be the East Tech Type 3, still available, I believe, from Ebay seller kleinvintagewatchparts . It provides, for me, the best combination of clarity, quality and cost but perhaps errs a little too much on the conservative side in terms of its profile.   The Type 1, from the same seller, is nicely executed but is not exactly subtle and I suspect may be just a touch too much for some in terms of its profile.

The sapphire I am afraid I just can’t get on with. With or without the anti-reflective coating, the mismatch between refractive index and profile of the inner and outer domes conspires to actively obscure the view of the dial. This problem extends to pretty much all of the sapphires I’ve tried (with one exception), one of which, commonly used by Seiko nuts world-wide, a much worse offender than the example considered here.

What about the exception to the sapphire rule? Well, when I first started buying 6105’s I was in the habit of sourcing replacement crystals from Noah Fuller of 10watches.com fame and at that time he supplied a coated sapphire crystal with a very nicely judged profile – neither too tall nor too short – much like the Type 2 in fact. I’ve still got two of these, one of which fitted to the second of my first generation 6105’s. Unfortunately, they are no longer available but if you can track one down, perhaps worth giving a try. Let’s conclude with a view of the two East Tech crystals in situ (Type 3 top, Type 1 middle) compared with that old sapphire of Noah’s (bottom):

and finally a view from above of the same three examples:

I’ll close by saying that to my mind there is a gap in the market for a decent mineral glass reproduction of the Type 2 original. Hint, hint.