The hierarchy of early 1960’s Seikomatic movements follows a path from the base 17 jewel calendarless 603 (the 20 jewel version features in the classic Seikomatic Silverwave), via the 24 jewel 394 self-dater (later becoming the 6205) and the 33 jewel 400 weekdater movements (latterly in slightly downgraded form appearing as the 6206) to, at the top of the pile, the 39 jewel 395, veritably brimming with an embarrassment of riches in the jewelling department. When last we met this movement, it was being used as the basis of a hot-rodded 62MAS but, in spite of my pedigree as a scientist and mathematician of sorts, I found myself roundly failing to achieve anything more than 33 in my attempts to count to 39. A bit of research suggested that the missing 6 jewels should have been located within the bearings of the autowinder mechanism, although it was unclear whether the bearings themselves would have been ruby or whether the additional jeweling was hidden within ball-bearing housing. Either way, the movement I had at my disposal at the time sported steel ball bearings with no evidence at all to suggest that those 6 jewels had been secreted somewhere out of view. That little mystery has niggled at me since and so I found myself acquiring a second 395 with the aim of putting together a complete and correct watch, one hopefully living up to the claims on the dial.

The first watch whose 395 I farmed for use in my 62MAS had a pretty decent dial and handset and finds itself now paired with a brother whose dial and chapter ring are in rather more of a sorry state, the lacquer peeling away from the edges of the dial and the chapter ring badly discoloured. 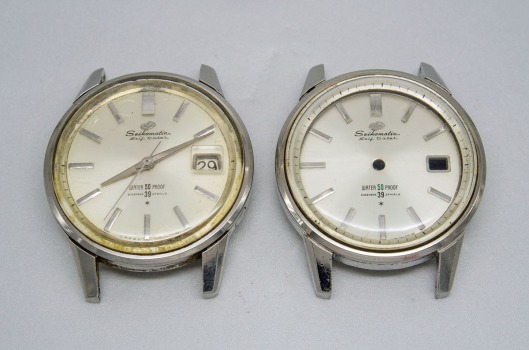 You’ll notice that the dials indicate that these watches would originally have been water proof to 50 m, a feat achieved in part by virtue of their 10 sided polygonal screw down case backs. 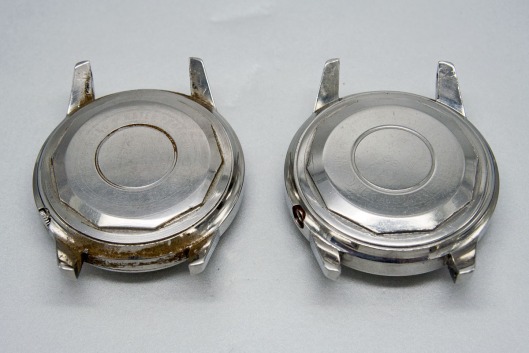 A closer look at the case back, and we can just make out the dolphin and king’s crown symbol, indicating this to be the highest-end waterproof Seikomatic of the time, as well as the model number, J13085.

No serial number though, so perhaps this is to be found on the inside of the case back.

Evidently not, just a repetition of the model number but removing the winding weight reveals what appears to be a serial number on the autowinding mechanism. 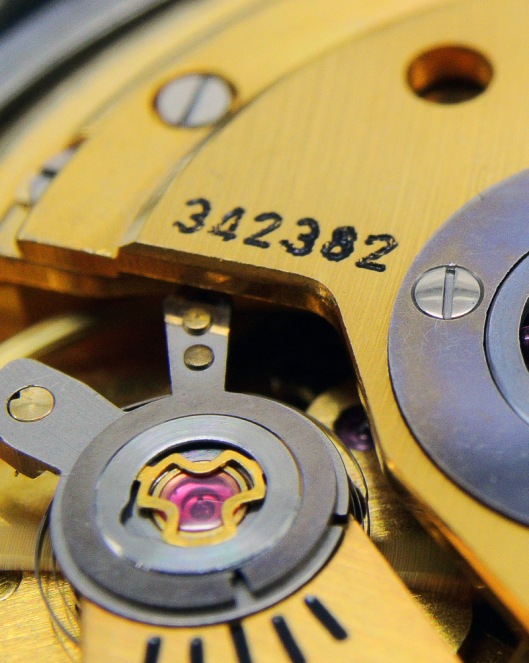 The fact that it starts with a 3 would suggest that this watch is from 1963 which is consistent with the fact that production of this model is known to have commenced in May 1963.

So, the idea with this project is to pair the movement and case from the more recently acquired watch with the much better dial, handset and chapter ring from the earlier watch. The wisdom of this approach can be better appreciated by comparing the donor dial on the left (below) which, while a touch grubby, is basically in nice condition, with the dial from the more recent watch (right) which would not be half bad were it not for the fact that the lacquer is lifting around most of its perimeter.

A clue to why the lacquer might have lifted is gleaned once the dial and hands are removed:

The movement, whilst not exactly swimming in oil, is certainly suffering from a very large excess of the stuff, clearly pooling around the upper edge of the date dial guard as well as the underside.

Anyone lubricating a watch movement in this fashion either knows nothing about the workings of a mechanical watch or perhaps prefers the more is more approach to reviving a sluggishly performing watch. Even with my somewhat sedate turnover in projects compared to a professional watchmaker, I come across this sort of slapdashery on rather too frequent a basis.

Anyway, in spite of this, with the date ring and guard removed, the calendar side looks very tidy indeed, everything present and correct including 9 semi-redundant jewels, there supposedly to ease the passage of the date wheel.

The reverse side of the movement is equally saturated in oil, pooling along the outer edge of the barrel and train wheel bridge

and evidently also having contaminated the balance hair spring, whose coils are stuck together.

Other than over-oiling, the only other point of note during the disassembly is the extent to which mainspring grease has leeched from the barrel, contaminating the main plate and lower side of the barrel bridge.

A thorough clean in the ultrasonic bath followed by the watch cleaning machine, and all is spick and span once more. 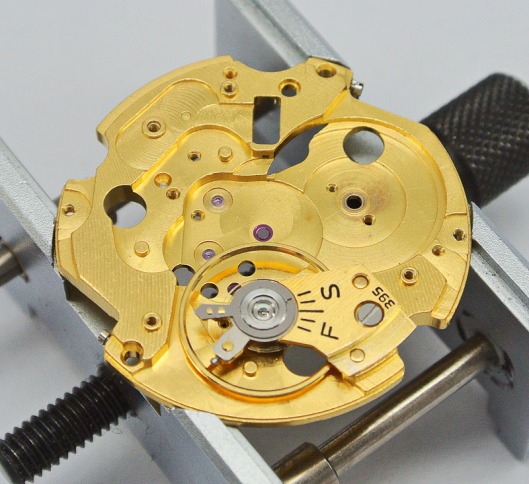 Rebuilding the movement starts as usual with the diafix settings in the main plate and bridge followed by the mainspring. I thought on this occasion, I might take the opportunity to compare the original mainspring (Seiko part number 401610) with a spare Generale Ressorts replacement (GR2533X).

To my eyes, the GR mainspring (upper) looks a little on the short side and the construction of the braking bridle is clearly different. I have no doubt that the GR would work but given the excellent condition of the original, I opt to reuse that instead of fitting a new, but arguably not quite correct replacement.

We seen the nuts and bolts of the reassembly of this movement design several times before and so I’ll hop and skip through the essentials, pausing really just to admire the gorgeous golden sheen of the cleaned movement coming back together

and observe its beating heart once more, power wound into the mainspring, and hairspring unstuck.

Reassembly of the calendar parts on date-only variants of the 62 series movements is complicated only by the precipitous condition one must leave the date jumper spring in whilst locating and refitting the date dial guard. It takes only the merest hint of a suggestion of a butterfly’s flap in the Amazon to persuade the spring to lose its tenuous grip on the jumper and fly off into oblivion. Fortunately on this occasion, that butterfly minds its own business and order is restored. A quick check that the quickset works and the date changes over correctly, and we can refit the dial and hands and turn our attention to the case.

With the bezel removed from the case, we see that the acrylic crystal sits on the outside of the case lip, pressed into place by the bezel, rather than using a inner tension ring pushing the crystal against the inside of the case lip. The 50m rating for this case design suggests either approach works effectively although the latter tends to be that most frequently adopted in more modern designs (such as in the 150m rated 62MAS for example).

The chapter ring sits loosely on the inside, a slot in its underside indexing with a tab on the edge of the dial.

Most of that deeply unpleasant-looking funk cleans off easily and with the case dried, we can install the chapter ring, a fresh crystal and the bezel

and we are ready to receive the serviced movement.

You may have noticed I have dodged the issue thus far of those missing 6 jewels, preferring instead to keep you fidgeting on the edges of your sets for the denouement. The total jewel count contained within the movement without its autowinder is 31 which implies that 8 are located in or about the autowinding mechanism. One of these sits at the axle of the pawl lever, and one services the transmission wheel. So where are the remaining 6? Well, as suspected the six ball bearings in the oscillating weight bearing assembly are ruby rather than steel.

It is tempting to conclude that the use of ruby over steel served little purpose other than to aid the marketing department at the time but here we are in 2016, 53 years after this particular watch rolled off the production line, and those 6 rubies are still present and correct and performing their role.

I rather like the idea that a design decision that might on the one hand be regarded as somewhat cynical might equally be viewed simply as extravagant over-engineering.

39 minus 15 is 24, the same jewel count as the 394/6205B. The essential timekeeping capabilities of the 395 ought to be identical to the 394 but I still really like this watch because, jewel-count not withstanding, it is a simple object of beauty.

In 1963, it also served as a statement of intent for the future.