Hare-brained schemes and cunning plans are all very well but all too often they fall victim to the law of unintended consequences. My recent ill-thought out flight of fancy to inject a bit of zip into a 6105 diver’s watch presented a conundrum, the satisfactory solution to which has taken a further three full months to resolve. In case, dear reader, you have forgot, to shoe-horn a high-beat 6146 into a 6105 case results in an unfortunate protuberance to the rear: a balance running at 36000 bph requires a mainspring of greater stiffness but to wind such a mainspring, an automatic watch needs a rotor of increased mass, and a rotor of increased mass will necessarily need to be of more substantial dimensions. The mid case and case back of my 6105-8000 is designed to accommodate the autowinder bearing assembly and rotor of the 21600 bph family of 61 series movements and the case back lacks sufficient internal clearance to provide the necessary room for the thicker rotor required of the 6146. 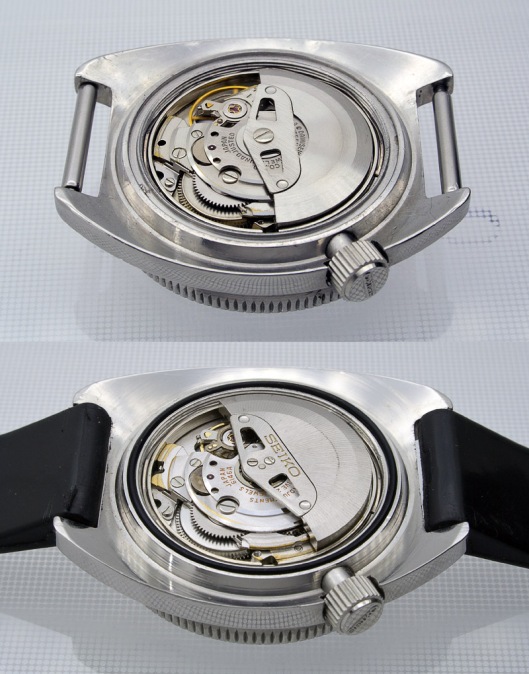 You may discern in the lower photograph that not only is the rotor thicker on the 6146 but it is mounted higher on a thicker bearing. A better perspective is provided in the animated gif below.

My holding solution back in June was to fit a case back from a 7548-7000 whose requirement to accommodate the off-centre battery of that hefty quartz diver’s watch means that it possesses the required internal clearances to permit the unimpeded operation of the rotor attached to my 6146.

A comparison of the internal landscape of the original 6105 case back (below,left) with that of the 7548-7000 (below, right) makes it clear how in particular the latter provides room for the thicker outside edge of the winding weight. 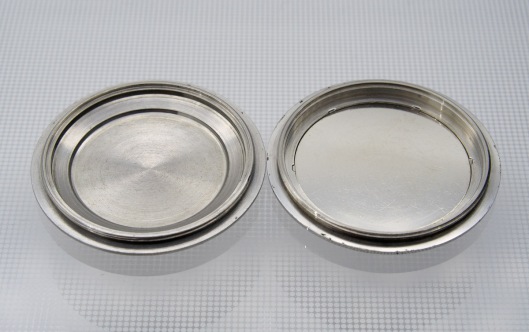 While this holding compromise allowed me to wear the watch, the case back itself jarred badly with the rest of the watch. 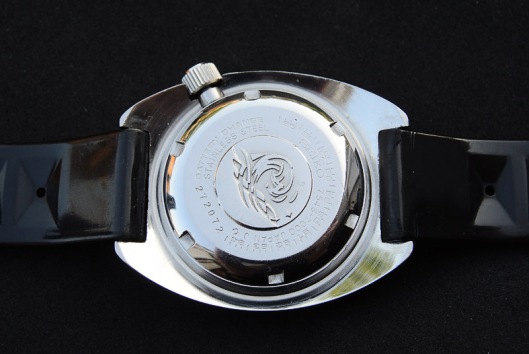 Not only is the style a clear decade or so younger than the rest of the watch, belonging to the era of the 6309 and to the later 200 m diver’s, but the text marks it out furthermore as being a completely foreign attachment to this pre-quartz era watch.

Of course, inappropriate markings can be removed and so that it what I elected to do (or rather have done, having called upon the expert services of a local mechanical engineer) as the first in a series of attempts to find some sort of permanent solution to my conundrum. 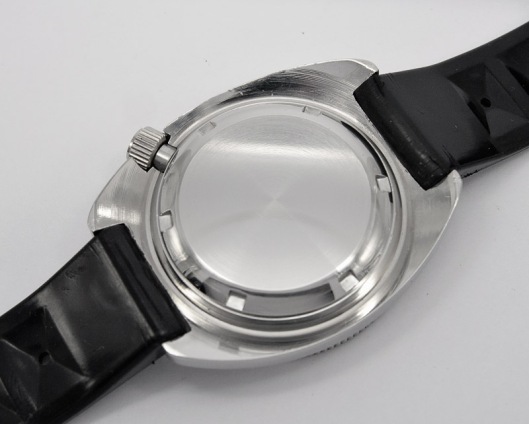 One appealing element of this modified back is that in profile, it is clearly providing, Tardis-like, the required additional interior space without significant increases in its external dimensions.

So, what other possible options might there be? Two occurred to me at the time, one obvious and plausible and the second a bit of a long shot. A movement as fetching as the 6146 surely deserves a window through which to admire it and so some sort of display back seemed like an excellent idea. The problem of course is finding one that fits the case, not only in terms of the tap of its thread and its diameter but critically in its ability to clear the rotor. A seemingly infinite variety of Seiko 5 watches are fitted with display backs, most of which appear superficially to be the same in design and dimensions. Two such examples are illustrated below. 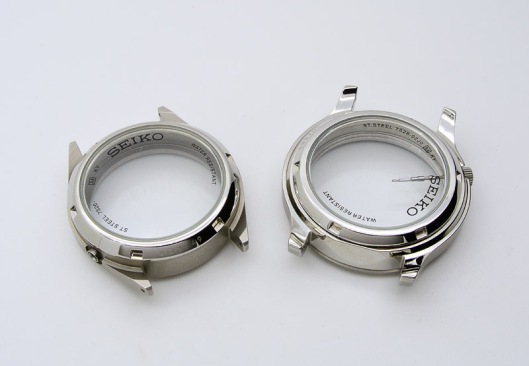 The first case back I tried was a back from a 7S36-04N0 and at first it looked like it might do the trick but two issues eventually ruled it out. The first was that not only must the tap of the thread be compatible, and the diameter be sufficiently generous to cover fully the case back gasket but the interior lip must also sit correctly against the case ring. 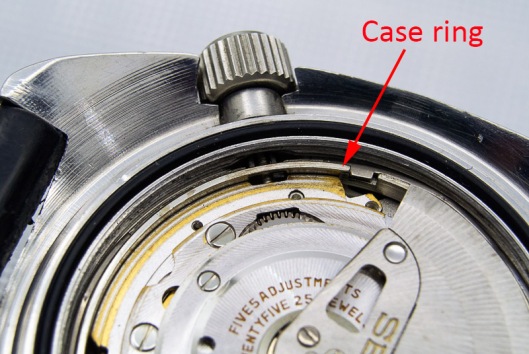 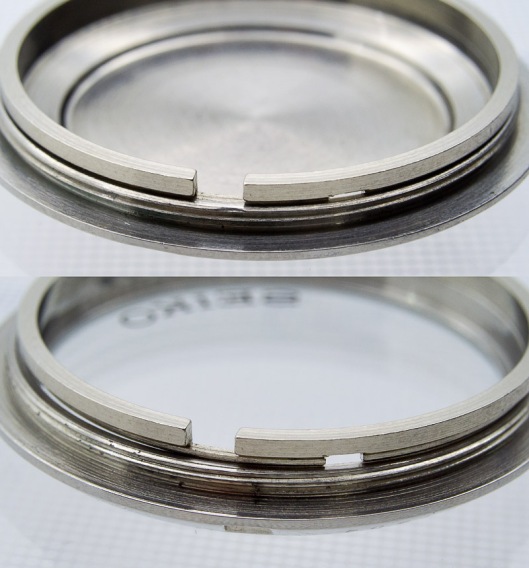 Having been thwarted, I threw good money after bad and tried another back from a different model with the same result and so at that point I abandoned the idea of a display back and settled instead on seeing if I could have a custom case back made. My mechanical engineer colleague offered to help and having taken measurements of the original back, machined a back from spare stainless steel stock but with the interior dimensions taken from the 7548 back. This is what he came up with: 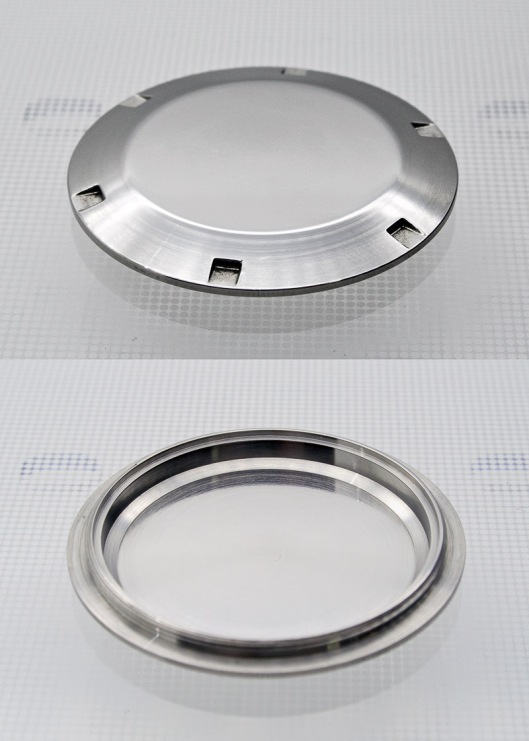 And here it is in situ. 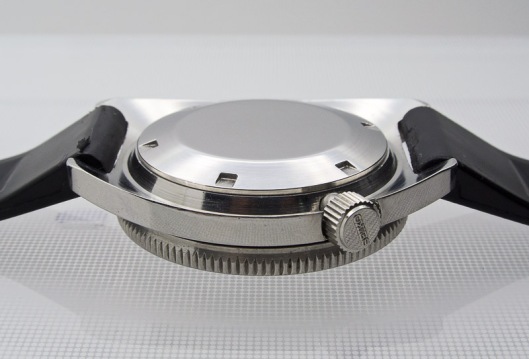 So job done then. Well, yes, but I still rather fancied the idea of a display back and so, throwing caution to the wind, bought my third Seiko display case back, hoping that the dimensions of this one might somehow work. The third back was from a 7S36-03D0 and superficially looked no different to the other two. However, a glimmer of hope was ignited by the fact that its inner lip was of the correct diameter to sit outside the case ring, and was therefore of the correct diameter to properly compress the case ring spring as the back is screwed down. 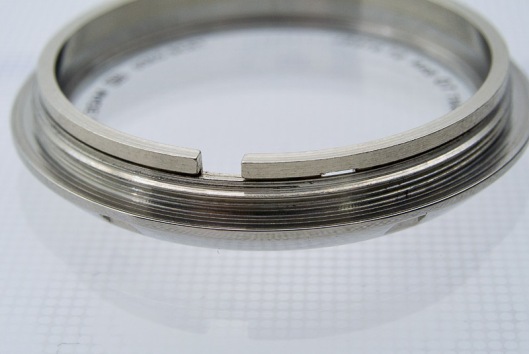 A test fit confirmed too that the internal dimensions were sufficiently generous not to impede the operation of the autowinder mechanism and so I set about some further minor modifications to complete the job. The first of these was to reduce the height of the internal lip on the threaded part to match that of the original case back. In the photo below, you can see the difference in profiles between the two. 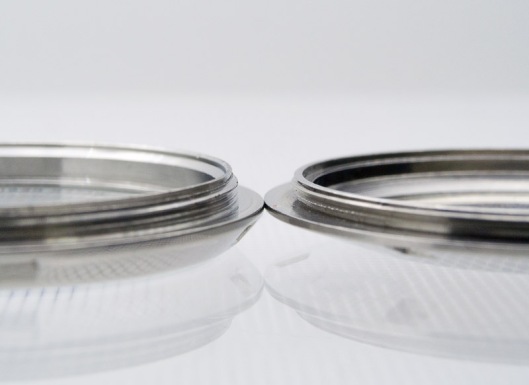 Here is the case back again but with the height of the lip reduced appropriately. 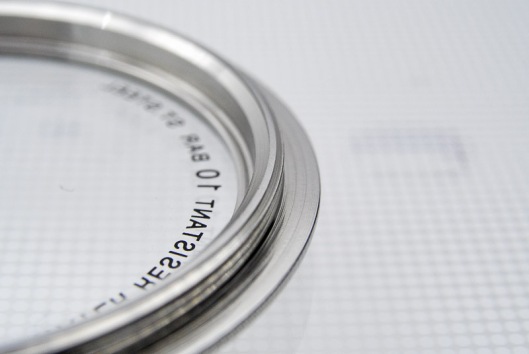 If the text on that 7548 case back jarred, then so too does the text on the inner surface of the glass window. I thought about trying to remove the printed lettering with the window in place but this required much use of Polywatch and elbow grease with the inevitable consequence being contamination of the groove holding the glass with Polywatch gloop. So, instead, I pressed out the window with my crystal press and cleaned off the text without too much difficulty and without any unnecessary mess. 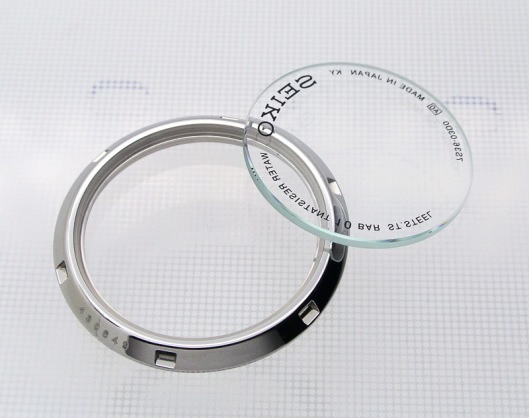 With the glass now sterilised, and pressed back into position, we are ready to fit the back. 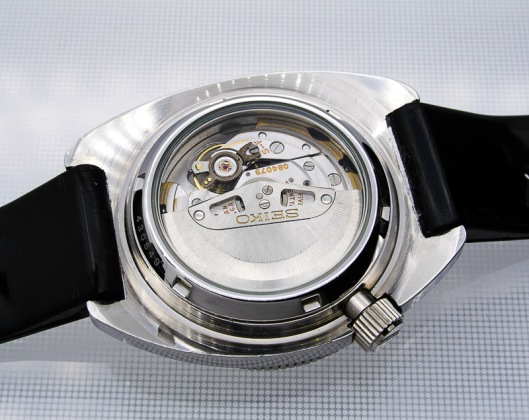 Somehow, this works and so for the moment I think that this one is now settled, with the added bonus of the custom-machined back as a fall back. Two more to finish. 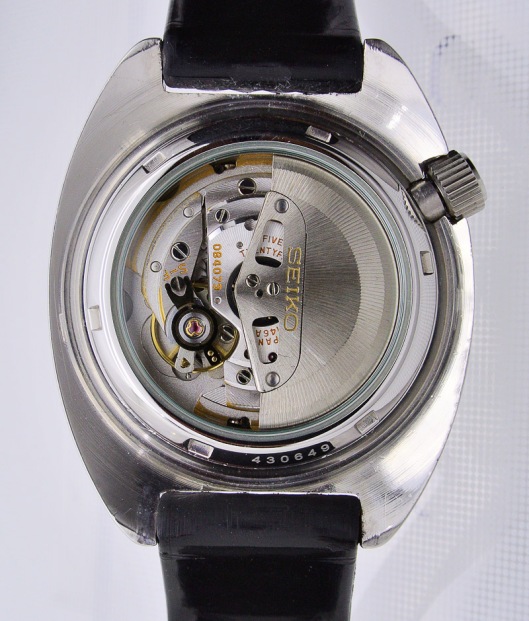 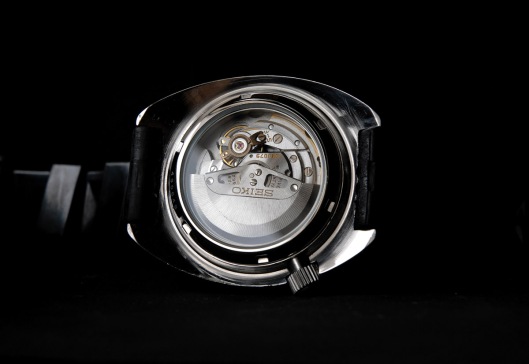 Sometimes, following one’s nose can get you into trouble, leading to a minor cascade of self-created problems the solution to which can appear to stretch further and further out of reach. In this case, I think we’ve ended up with a result that rather better suits the spirit of this particular project than if those unforeseen challenges had not presented themselves. I am rather chuffed.

11 thoughts on “The law of unintended consequences”