Last Spring I developed a hankering for a quartz timing machine, the throughput of watches powered by the dark side having rather conspicuously increased to the point that I felt such a device would be a useful tool in my armory. This idea having taken hold, and having then found myself the unexpected winner of an eBay auction for a Greiner Quartz Timer II, I committed to driving to Manchester to collect the device, baulking at the prospect of doubling my initial outlay on postage costs.

The Greiner, it turned out, was part of the liquidation of some of the assets of a retired watchmaker and in the interests of assisting the seller in clearing out some of the miscellany, I found myself carting away one or two bonus freebees that were to make my schlep over the Pennines worthwhile. You might argue that a cheap Greiner quartz tester should have been reward enough and that would certainly have been true had the device itself turned out to function as originally intended. But alas, all that it had to offer was the comforting orange glow from its fabulous period Nixie tube display.

My consolation prizes included, notably, a somewhat industrial-looking watch demagnetizer, that has since turned out to be brilliantly effective and now indispensable; and secondly a partially disassembled, water-damaged 1960’s Breitling Top Time, missing a number of key parts, but still sufficiently charismatic to excite a momentary uplifting in the spirit associated with the prospect of a tangential diversion into the unknown and unfamiliar.

My previous knowledge of Breitling extended as far as being aware that the company had gone bust towards the end of the 1970’s, was subsequently bought by Sicura, and that, in its current incarnation as the producer of over-sized shiny and somewhat ostentatious watches, it is affectionately often referred to as Breitbling.  Oh and they make something called ‘The Emergency’. That’s it.

Prior to its decline, fall and reinvention, Breitling had established a reputation as a specialist producer of chronographs and timers, with a particular focus on the aviation industry, supplying cockpit instruments to aircraft manufacturers as well as wristwatches to pilots and navigators.   Its iconic Navitimer featured a slide rule rotating bezel that became indispensable to pilots in the 1950’s and 60’s in helping them with their onboard calculations of air speed, distance, fuel consumption and rates of climb and descent. That watch would go on to become one of the first to be used in space on the wrist of astronaut Scott Carpenter on his orbital flight aboard the Aurora 7 capsule in 1962.

In constructing their marketing strategy for the newly optimistic 1960’s, Breitling struck upon the idea of targeting the “staggering purchasing power of the youth market”. “Today’s young man wants an instrument panel on his wrist, not just a watch” and “even young women are discovering exciting new elegance in the aggressive look of the chrono-type timepiece”.

The fruit of that concept was the Breitling Top Time, produced from 1964 and positioned as an entry-level chronograph sitting at a price point considerably lower than the Navitimer and Chronomat flagships. 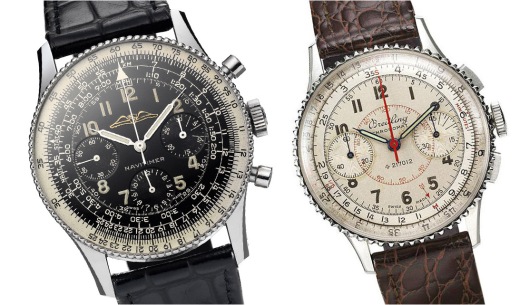 By the time of the introduction of the Top Time, Breitling had long-since transitioned from in-house to third-party movements, with the Chronomat and its successor Navitimer using Venus 176 and 178 pillar wheel chronographs, respectively. The new Top Time models employed the Venus 188 cam lever chronograph movement, but within a year or two, the Venus movement was phased out in favour of the Valjoux 7730. This change was the result of Valjoux having swallowed up Venus with the Venus 188 design then transferring more or less unchanged into the Valjoux range and rebadged as the Valjoux 7730. This brings us nicely to an initial appraisal of my serendipitous acquisition.

What we have here is a Breitling Top Time 2002. Its serial number dates it to early 1965. It is a pretty little thing and while it most clearly has potential, we can also see why its previous owner may have written it off as not worth the trouble. With no crystal, no hands, a missing pusher and crown, no crystal retaining ring and a water-damaged dial and index ring, this does not convincingly represent the basis of an economically viable restoration if originality is high on the list of essential requirements. I have no parts stash to fall back on, no experience with vintage Breitling and no obvious sources of original Breitling parts. A quick survey of eBay does unearth a new old stock set of hour/minute hands but the asking price of £150 makes me blanche (incidentally, those hands are still for sale 8 months later with the same asking price). So whatever route I take in attempting to get this old thing running again is going to have to be on the cheap. Breitling purists had better look away now.

The waterproof case is a unibody design with the movement accessed through the crystal. With the watch in its current state though we do not need to worry about access issues because the crystal has long since flown the coop.

I am keen to get a look at the movement and all that is required at this juncture, is to lever out the index ring and then tip the case over. 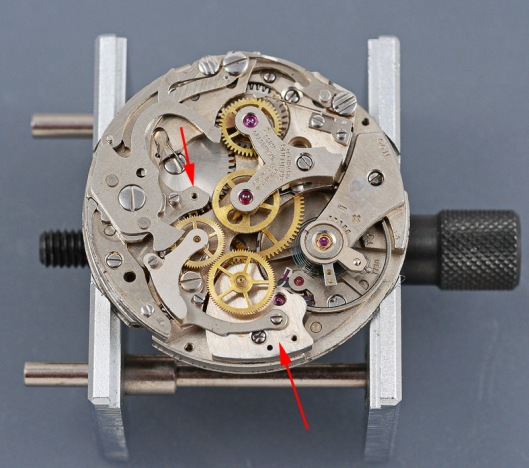 You might just be able to make out the movement model number beneath the balance wheel, which identifies this as a Valjoux 7730. The red arrows indicate two conspicuous vacancies: the lower, a missing coupling clutch spring and screw and the upper, the mounted sliding gear and its screw. The latter was knocking about in the plastic box in which the watch came but the axle was sheared on one side of the wheel and the two parts separated.

At this point in proceedings, I needed to get a sense of the viability of this as a project that was going to lead somewhere. The missing movement parts (that I knew about up to this point) I was able to source reasonably easily at modest expense but the casing parts would need some research. Several weeks of endeavor led me to the conclusion that I was not going to be able to find the hands or crown or pusher or movement retaining ring and so I would need to find suitable substitutes. The most costly of these were the pushers, the expense the result of a couple of false starts in getting parts that conformed to the measurements I had taken. I don’t propose to take you through the gory details at this point though – we can do that at the appropriate time – so for the moment, let’s survey the box of bits that I have accumulated up to the point that resolve has tipped into action and I find myself making a start.

Somewhat to my relief, the dial side of the movement looks complete and in good condition. The missing hour wheel was in the box and so nothing more to add to the shopping list.

Given the unfamiliar territory, our best bet is to dive in, guided by whatever materials I can find online. The most useful of these turned out to be a 1953 vintage technical guide to the Venus 188.

Arguably the most important component of all is the balance and this one appears to be entirely un-abused.

With the balance safely tucked away, we can start to disassemble the chronograph parts, starting with the start and reset cam levers and then removing the mounted hammer, exposing the sliding gear spring (sequence below, starting top left and then working around clockwise). 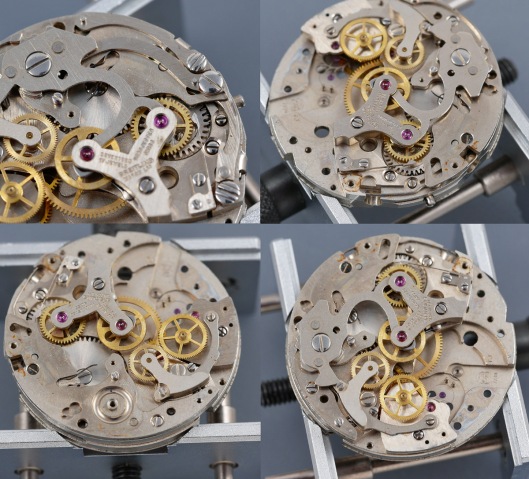 I was slightly uneasy about the chronograph bridge, which did not appear to be sitting entirely flat in the region of the central chronograph runner. Removing the bridge exposed a possible contributory factor. 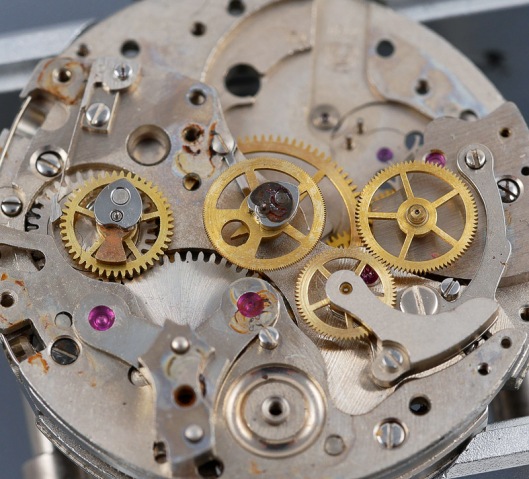 The cam on the top of the chronograph runner has clearly suffered from the same exposure to the moisture that has affected the dial. I had wondered if the gathering oxidation had caused the arm of the bridge to bend up slightly but the chronograph runner sits on a tension spring and so that seems implausible. As usual, perhaps the bent bridge is the work of a watchmaker looking for a lazy means to adjust the vertical position of the runner. Whatever the reason, I made a note to straighten things out later on when the movement comes back together.

The mounted coupling clutch comes off next, which presents me with a rare opportunity to use my presto tool for removing third or chronograph driving wheels.

The driving wheel provides the route by which power is transferred from the fourth wheel to the chronograph. We are almost finished removing all of the chronograph parts before moving on to the heart of the movement. The minute recording jumper comes off next, leaving its rest in place on the barrel bridge, thereby providing unimpeded access to the chronograph plate.

With the chronograph plate removed, followed swiftly by the crown wheel and ratchet wheels, we get a nice view of the click spring and click.

Removing the combined bridge releases the escape wheel and the fourth wheel on whose axle the driving wheel was sitting until a short while ago.

Off with the barrel and train wheel bridge and we arrive at the core of the movement: the barrel, centre wheel and third wheel. The barrel opens to reveal a clean and shapely mainspring, looking likely to provide many years of service yet.

The shock settings in this movement, rather than the commonly encountered Incabloc, are of a proprietary Breitling design known as Breitling Shock. The essential architecture is similar to other shock settings but the construction somewhat different: in the Breitling design, the cap jewel is an integral part of the setting with the spring mounted around its upper. This assembly is secured into the block by means of the two ears on the outer edges of the spring that sit in a circular channel in the block. Rotate it until one of the ears clears the cutout and one side pops up; repeat and the other ear clears and the cap jewel assembly can be removed. This exposes the hole jewel which sits loose in the block setting rather than being captured in a chaton. We conduct this process twice: once for the setting on the dial side and once for the setting on the balance cock.

At this point, we are set to clean all of the parts, following which the stage is then set for the reconstruction.  We’ll pick this up in Part II, the timing of which will depend on the demands being made of me by my nearest and dearest over this holiday period. I break away now to tend to the synthesis of the cranberry sauce.