You need look no further for evidence that the 1960’s were truly a golden era for Seiko than the wonderful selection of watches produced during that decade under the Seikomatic branding.  The first Seikomatic appeared in 1960, simple in form and function but rather lovely and providing the foundation for a range of elegant, stylish watches spanning the elevated consumer to more luxurious end of the market, with features including waterproof cases, calendar complications and of course an automatic movement featuring the magic lever mechanism.

That first Seikomatic was fitted with the automatic 603 calibre (subsequently named the 6201), a 27.6mm diameter movement running at 18000 bph and coming in 17, 20 or 30 jewel variants (we encountered the 20 jewel version a couple of posts back here in that splendid Seikomatic SilverWave). The date complication first appeared in the Seikomatic Selfdater of 1962 fitted with the 24 jewel 394, the precursor to the 6205. That in turn spawned the luxurious 39 jewel 395 Self Dater 50 Proof of 1963. From 1963 through 1967, Seiko released a number of Seikomatic Selfdaters and Weekdaters, the latter of which used the 400/6206 movement and which spawned the first automatic chronometer Grand Seikos. All of these watches used variants of the 62 series of movements which traced their lineage back to that 603 of 1960. A second tier of Seikomatic joined the 62 series watches from about 1964/5 fitted with the 83 series movement.

This post enters the fray in August 1964 with a slightly weathered example of a Seikomatic Weekdater 6206-8990. Earlier incarnations of this particular model appeared in mid-1963, fitted with the 400 movement. Mine, whilst numbered according to the newer model naming conventions, is an early enough example to feature the gorgeous Seikomatic script on the dial.  Here it is as received:

Pretty presentable on the whole, the usual scuffed and slightly crazed acrylic crystal and a chapter ring curiously missing most of the minute markers but a handsome thing nonetheless.

The movement is an absolute peach, looking resplendent in all its golden glory: 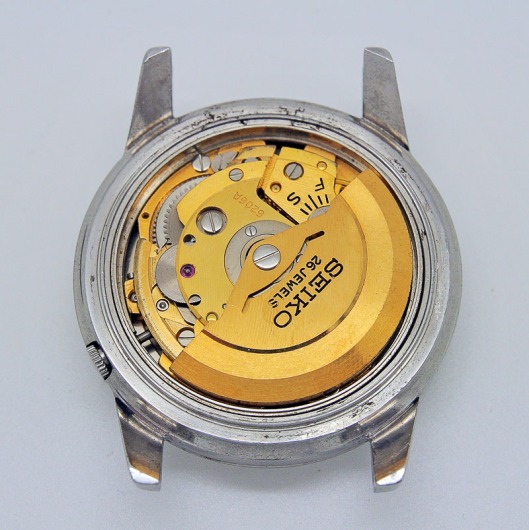 and with a gentle rock, slips lazily into its rather leisurely rhythm as the balance wheel swings back and forth at its native rate of 5 beats per second:

A quick check on the timer reveals it’s running slow but with an excellent amplitude of about 250 degrees. Removing the movement, bezel and crystal and we see some clear signs of exterior corrosion to the case, but hopefully just flakey suface oxidation that should clean off.

The dial is in generally excellent condition though, barring the faintest hint of spots of discolouration in one or two places around the extreme edge whilst the hands are decent too, if a little grubby:

Here’s a closer look at that lovely printed dial script:

Off with the dial and hands and that beefy looking case ring, used to secure the movement to the mid-case, and we can start the dismantling process, calendar side first

You may have noticed the two-tier arrangement of date and day wheels, which we’ll get to again later, and the dial ring, secured to the mainplate by three screws, which provides a secure base for the periphery of the dial to sit upon.   You can also see in the photo top left that the date dial guard and date jumper guards are fitted with a jewel each, presumably to aid the easy passage of the day wheel as it performs its duty. The day jumper spring incidentally sits in a furrow to the rear of the date jumper guard

Turning over we can attack the balance side:

Not much to cause any concerns here other than the ubiquitous leakage of moly grease from the barrel arbor. The only wear or damage I could find anywhere was the secondary jewel fitted to the centre wheel bridge, which had cracked in a number of places:

Fortunately, I have a spare 6206A which I have farmed for parts in the past and this gives up an undamaged replacement.

With the movement completely dismantled and cleaned we can appraise the component parts, with Diashocks, cap jewels and screws off stage left somewhere. 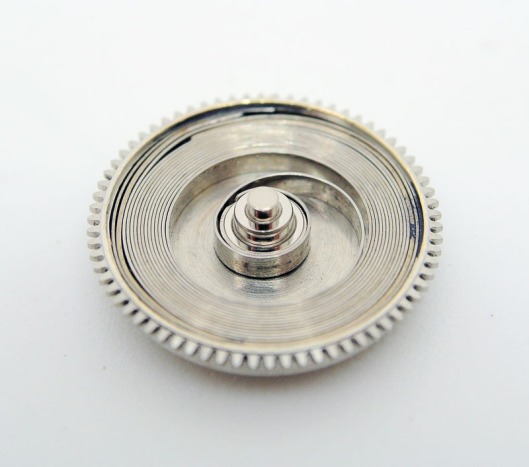 followed by the Diafix settings on the main plate and train wheel bridge: 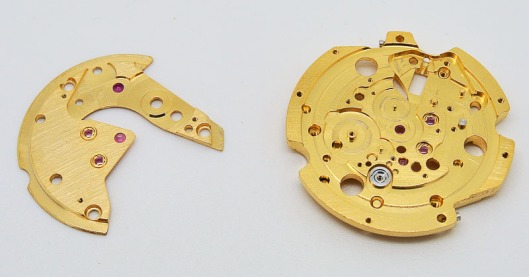 The Diafix and jeweled bearings on the main plate and train wheel bridge account for 12 of the 26 jewels. Next up, the keyless works come together, then the centre wheel and centre wheel bridge (which, together with replacement secondary jewel fitting accounts for a further two jewels) before returning to the calendar side to fit the minute wheel and cannon pinion: 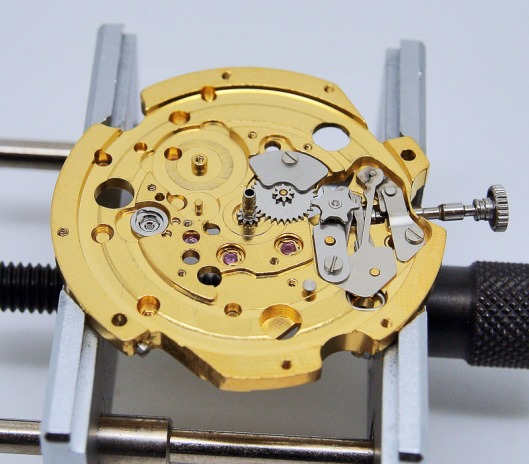 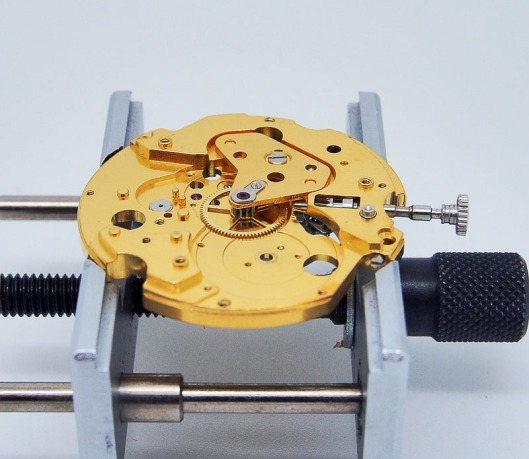 Next, we fit the barrel and train wheels followed by the train wheel bridge:

In with the pallet fork and pallet bridge (3 jewels)

balance, with Diashock settings refitted both sides, a few clicks of power wound into the mainspring and off she goes: 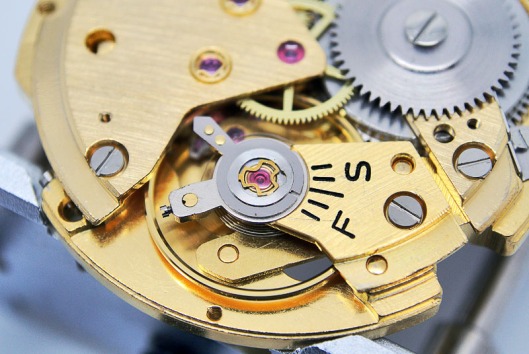 With the four jewels in the Diashock settings, the impulse jewel on the balance wheel, the jewel count stands at 22. A quick check that all looks healthy on the timer and we can refit the calendar parts (bringing the jewel count to 24 with those two jewels in the date dial guard and date jumper guards) and take a look at how the different levels at which the day and dates wheels sit are accommodated by the dial. You can see from this shot of the reassembled calendar how the day wheel sits considerably proud of the date wheel:

The fact the it’s not flush means that the dial needs a recess machined in its rear to make room:

I’m not sure if this is intentional or the result of the day complication being retro-engineered to a movement not originally designed to accommodate such a feature but it does add a nice three-dimensionality to the dial landscape.

Although the original hands are perfectly presentable, a few pounds splashed out on a new set adds a nice little lift to the appearance of the watch face:

With the innards sorted, we can give the case a clean:

refit a replacement chapter ring, complete with all its ticks, and the crystal, pausing to note that the it sits on the outside of the case lip, rather than on the inside 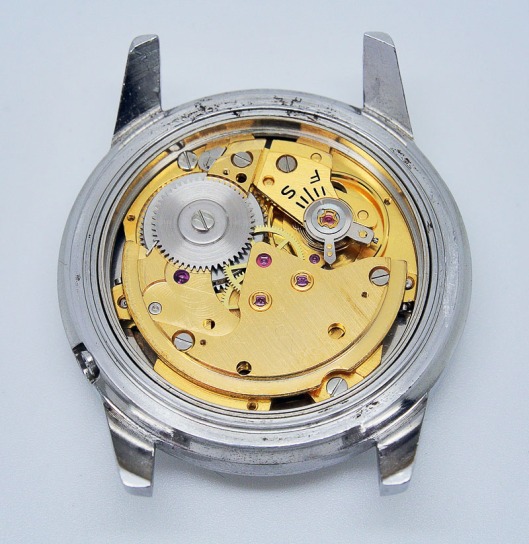 fit fresh gaskets to case back and crown, and then add the auto-winding mechanism (which with its two jewels brings the jewel tally to 26) 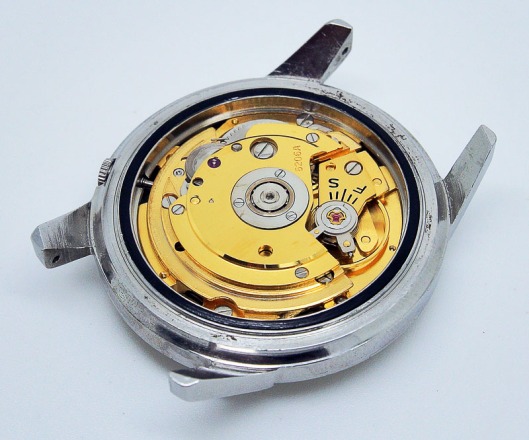 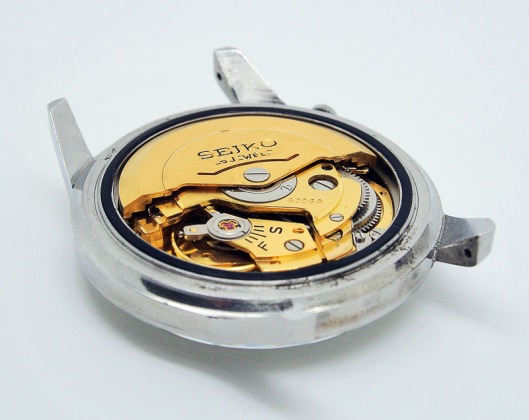 and we are finished. Resisting the temptation to lower the tone with a NATO, its on with a black leather strap to complete the picture. 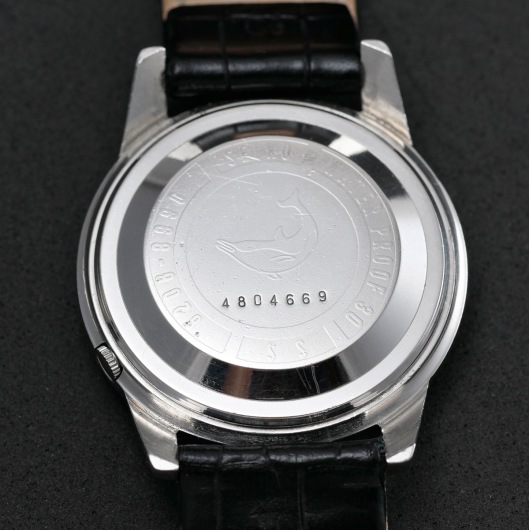