To lume or not to lume? That is a question that’s been percolating around my noggin for the few weeks that have passed since I finished reinstating some degree of originality into the longest-serving stalwart of my collection, documented here. One of the main features of that restoration was to fit an original, if slightly scruffy 6105 dial married to a set of correct, original hands part-sourced from a 7005 dress watch. The dial was good enough for me to be satisfied at the time to leave it alone, barring a good clean, and fit the hands, also in their original state.

However, the marriage of the green-hued lume of the hands with the dirty grey of the dial’s lume plots grated (illustrated quite well in the photo above), and I ended up reluming the hands in an attempt to correct the mismatch. To be honest this was only partly successful but good enough for me to opt to use this as my holiday watch this year. 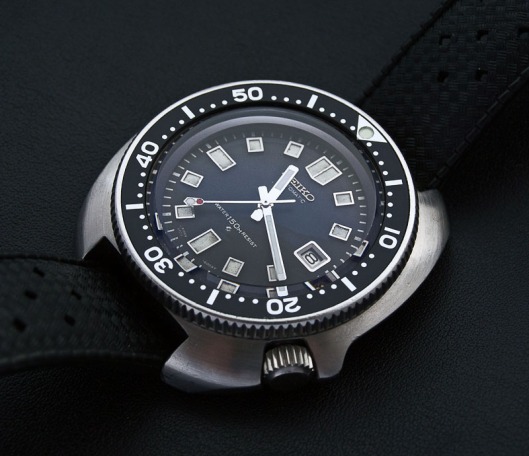 It looks ok – good even – but having it on my wrist every day for the best part of three weeks increasingly highlighted the obvious flaws in the appearance of the lume in the dial markers and the uncomfortable contrast they made with the clean look of the relumed hands. As I use this watch as my go-to default, as a waterproof do-it-all and a frequent work watch, it also seemed right that I should be able to tell the time at night and so by the end of the holiday, I had resolved to have a stab at reluming the dial myself. This is not something to undertake lightly. I’ve seen a lot of very unsuccessful relumes, some performed by professional relumers, but most by first timers such as myself making a real hash of it. However, I’ve relumed a few sets of hands and have been acquiring some sense of how to make up and handle the wet lume mixture and so felt I had enough of an idea of how to proceed to give it a go. So let’s start then by taking a closer look at the dial and hands, still fitted to the movement, hopefully highlighting the true state if that aging lume:

Looking at this does nothing at all to divert me from my mission. So, lay on, MacDuff (but with not too much vigour). The next step is to remove the dial from the movement and to support it in a such way that the lume can be removed without risk of distorting the dial. So, I placed it onto a flattened lump of watchmakers putty and sat that on top of a casing cushion.

A brave pill and a deep intake of breath and off we go, starting with the marker at the 6 position.

Very careful use of two sizes of jeweler’s screwdrivers, working initially northwards away from the centre of the marker, then swiveling the dial around and working towards the base of the marker frame. The lume was not so hard that there was any real danger of slippage but I wanted to avoid making any contact with the surrounds which are in excellent condition. Working anticlockwise, I made my way around to the twelve marker without incident.

Five more polished off at a steady but unrushed rate, and the scene is set for the second part of the process.

Having removed all of the old lume, I gave the dial another good clean to get rid of any traces of lume dust and then set about making up the lume mixture. I have two colours of luminous powder, one white and one yellow, the yellow looking a little more like pale green in some lighting, both of which emit green luminescence. The 6105 dials were originally lumed in white but given the age of this watch I wanted a slightly off-white colour and so made up a mixture of about one part yellow to about two parts white, thoroughly mixed with an equal part by volume of matt binding agent.

I was conscious that I needed to complete the whole dial in one sitting before the lume mixture started to dry and so I worked steadily around the dial without pausing to take any photos and risk compromising the process.  My method was to take a sensible sized blob of lume using the yellow oiler shown above and deposit into the centre of each marker, initially teasing it gradually towards the corners using the yellow oiler, and then into the corners using a finer blue oiler. This approach worked a treat but by the time I had got to the 10 marker (working anti-clockwise) the viscosity of the mixture was starting to increase as it dried. I kept going though and made it all the way round before I became conscious of it affecting the approach I was taking. Here’s an overview of the completed dial, markers still wet on the left hand side and drying on the right

The trick, I believe, is not, under any circumstances, to allow yourself to be tempted to interfere with the lume once it has been applied and has started to dry. Just let gravity do its stuff, the surface tension helping the lume to assume an even and flat appearance as it dries. Here’s a better view of the drying dial

in which you may be able to discern the contrast between the slightly glistening finish of the lume on the 7, 8 and 9 markers and the flattening matt finish on the drier markers to the right.  With the lume assuming something approaching a dried state, we can take a critical closer look. Here are a few of the markers at the bottom of the dial

and here’s the tricky 12 marker with its twin plots. 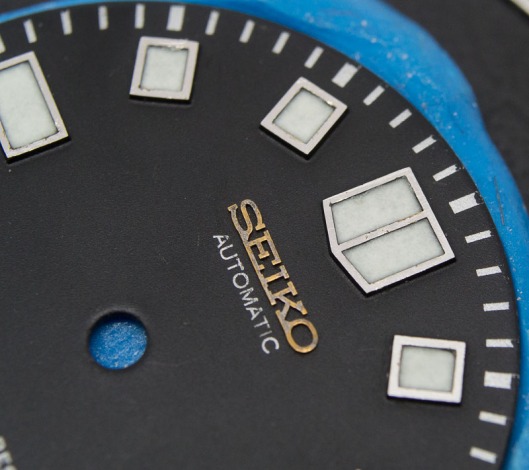 I have to say, this has gone rather well. Somehow, I’ve ended up with a finish which I hope does not too obviously flag the fact that this is a relume. I like the flat matt finish, not quite flush with the surrounds, with a hint of a shadow around the lume edges somehow imbuing it with something of an authentic vintage look.

I turn next to the hands as the previous relume was just a bit too white, not quite matching the off-white colour I’ve used on the dial markers. After a couple of attempts at the minute hand, I manage a finish I am happy with

followed by the lume pip on the bezel

With everything done, I tidied up the edges of the hands, left it all to dry for a day and a half and then refitted the dial and hands to the movement

All that remains is to re-case the movement

and take a couple of glamour shots to show off the face lift: