There are times when a wise man knows when enough is enough, when to cash your chips, to pull back from the precipice, to leave well alone. I like to think that I tend, on the whole, to know when to reign it in but that wisdom sometimes has to do battle with a part of me that knows when something is not quite right and when that ‘not quite right’ is something that I will not, in the longer term, be able to tolerate. There are numerous examples of those sorts of internal battles documented here and this latest little diversion I think illustrates the extent to which to follow one’s impulses can both provide rewards but can also illustrate the potential folly that emerges from a failure of impulse control. The subject of the present conflict is a Seiko 62MAS whose resurrection was documented here back in 2012, with a subsequent re-visitation to the movement here.

The first renovation involved a decision to send the dial and handset to a professional relumer based in the USA. The dial returned some time later with a competently executed relume in white but that colour choice turned out to be a mistake because it violated the original aesthetic of the watch whose lume would have been a fairly vibrant green/yellow.

The dial also returned with a conspicuous scratch (which you might just be able to see above the word ‘WATER’ in the photo above, inflicted during the lume removal process, adding to a couple of existing scratches that were evident when I first purchased the watch. Some time later, my dissatisfaction with the result developed to the point that my resolve to leave it alone dissolved and I sent the dial and handset off to a professional relumer in the UK to relume in green. 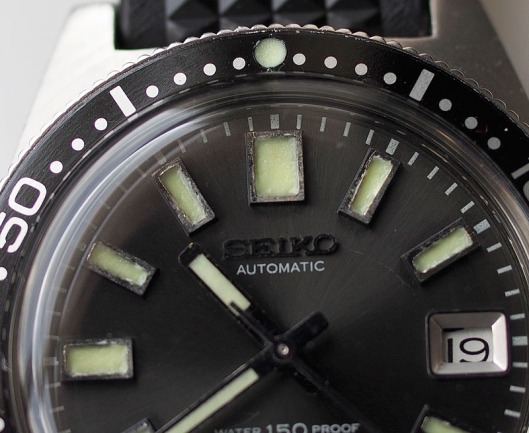 The result of that was a much more authentic colour but the dial emerged from the experience with another scratch and the lume itself was over-diluted with binder giving it a translucent effect and a rather glossy appearance. I subsequently managed to dull the finish by working the lume plots with a roughened bit of pegwood but the effect continued to grate, niggling away month after month and year after year until…

…my resolve dissolved once more. That dissolution coincided with a decision to convert my other pimped-up 33 jewel hacking 62mas back to its original specification by reinstating its original movement. That process would then release its higher-grade movement as a hand-me-down for the subject of today’s post whilst additionally providing the necessary impetus for me to inflict its third, and hopefully, final relume.

With the preamble out of the way, we can set to it, starting with the most hazardous part of the operation: removal of the existing lume from the dial plots. This process is hazardous because of the obvious risk of slippage and further damage to the dial. If I was to manage to scratch the dial too, then I truly could consider myself to be up there with the pros.

The next step is equally fraught with potential booby traps: the lume mixture needs to be sufficiently concentrated so that the binder does not dominate the mix, but it also needs to be liquid enough to flow into all the nooks and crannies (with some encouragement). If it is too thick then it can end up akin to layering marzipan onto a Christmas cake. With the lume mixed and a selection of oilers at the ready to dispense and direct the lume, we can proceed.

As with my 6105 relume, described here, I did not want to compromise the process by breaking to take photos so the photo below documents the point of completion. I started with the 12 marker and worked my way round clockwise and you can probably see that the markers from the 4 through 11 are still wet, whilst those between 12 and 2 already drying nicely.

Meanwhile, the 6217A had found its way back to its rightful keeper, liberating in the process, the 33 jewel hacking 395/6218 hybrid. 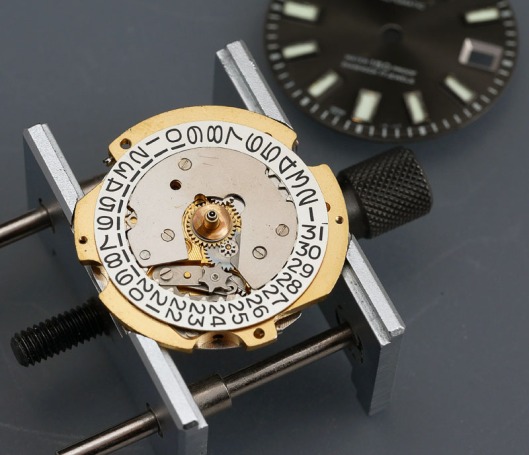 The dial had been left for a day or two to dry and was ready to fit to the movement.

I am pleased with how this looks. The original lume would have been applied to these dials in such a way that the meniscus clings to the edges, forming a dished aspect with the surface of the lume not flush with the surrounds of the framed markers. Somehow, my technique seems to have duplicated this look quite well and the visible shadows around the edges somehow conspire to lend a reasonably authentic look. To my eyes at least, this does not look like a conspicuously relumed dial and that is probably as good a result as I could have hoped for. I should probably have done the hands at the same time as the dial but I’ve been so busy at work the past few weeks that I’ve only been able to do my watch work in short bursts. Nevertheless, I did eventually get around to the hands, and after a day or so drying, they are ready to join the dial.

With that done, the movement, dial and hands are ready to drop into the case (autowinder mechanism waiting stage right).

The autowinder and rotor follow. You’ll notice that I’ve reverted to a 6217 rotor, in large part simply because it looks better than the slightly shabby 33 jewels rotor I’d fitted when last we met this movement.

Flipping over to survey the result, it appears to me a job reasonably well done. It looks good, better than at any time since I picked it up originally 5 or 6 years ago. You may be able to discern though that it has not emerged entirely unscathed from my attentions. In removing the lume, I have managed to follow in the footsteps of those that preceded me in marking the dial (between the 10 and 11 markers). In spite of that mishap though, I think my inability to leave well alone on this occasion has been justified. I like the watch so much better than before, and no significant aesthetic niggles remain. 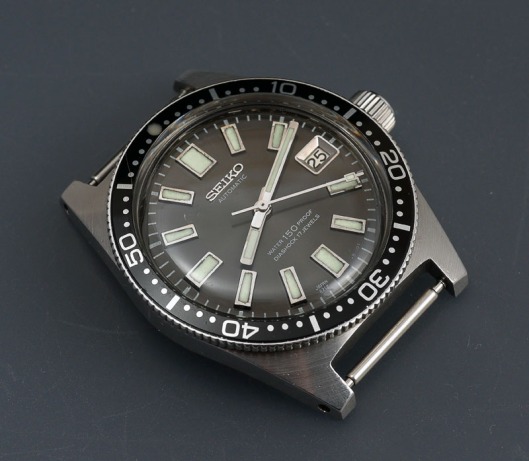 And at attention, obviously vintage, yet still capable of dazzling. 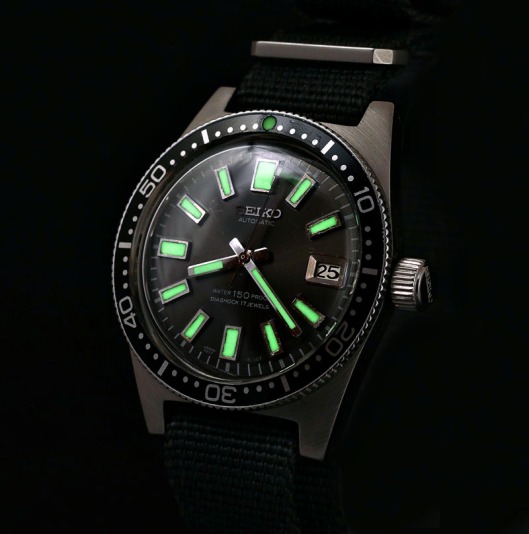