The second of the two 1964 projects is a simple yet handsome 6601 automatic, again, slightly larger than might have been the norm at the time and celebrated among Seiko watch nuts principally for the close similarity of its dial and handset with that of its more illustrious stable mate, the 6217-8000 (see earlier post here).

In fact the 6601 dial preceded that of the diver by a year or two and is different in ways not immediately obvious crystal side.  For starters this one is a convex dial, curving down gently towards its extremities which shows off the glossy, starburst finish to good effect.  It also has a very dark, rich brownish hue, not entirely obvious from the photos but clear in the flesh.  The other more obvious difference of course is that the diver has a date wheel, with the accompanying window (see below). 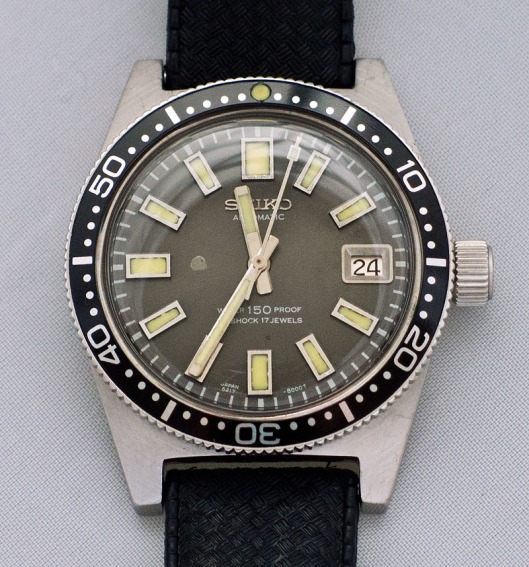 This particular 6601 was produced during the transition period during which Seiko adopted their now familiar model numbering system comprising the movement calibre number (in this case 6601) followed by a second sequence of four digits indicating the model.  The case back on this watch was worn almost smooth but you still see clearly the serial number which indicates that the watch was produced in October 1964, a month or so after the 7606 covered in the previous post and which interestingly does use the 8 digit model number convention. 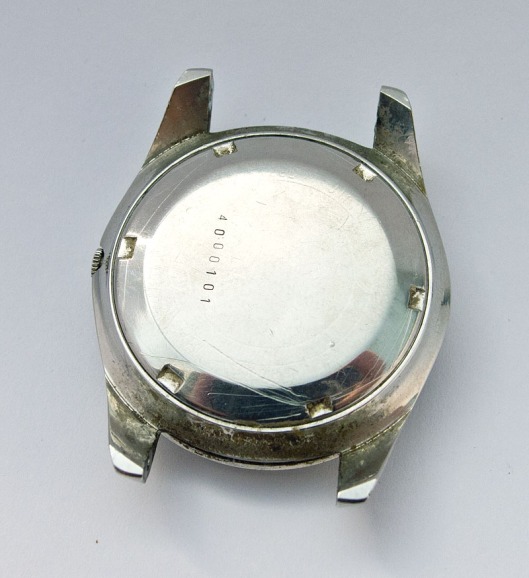 If we open the watch up, we find the model number embossed on the inner surface of the case back:

When you are trying to find case parts, it’s helpful to know the model but this one, J13055, was of very little help in sourcing parts.  I failed completely, for example, to find which crystal part number this watch used and had to resort to trial and error (see later).  Speaking of which, the crystal fits to a stepped rim surrounding the circular dial aperture and is held in place by the friction-fit bezel which itself is held in place through the snugness of fit to the crystal.  So in order to remove the latter, you have first to remove the former.

Doing so provides us with a good view of the gunk (and hair!) adhered to the case.  It also allows us to appraise the dial which is really very nice – a little dirty and the lume has seen better days, but no corrosion to the hour markers although a touch of black gunge on the hands.

Turning the case over, we can get a better look at the movement, which looks ok if dirty:

And with the movement out of the case, we can get a better view of the differences between this dial and that the 6217, its convex shape being obvious in this comparison.

With the hands removed,

we can take a look at the rear of dial: 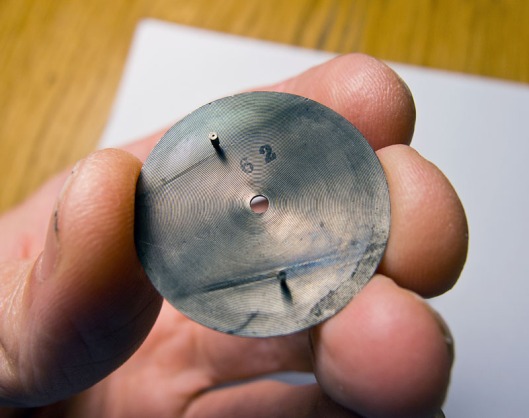 The dial feet sit further inboard compared with those of the 6217 dial.  I wonder if the 62 on the back indicates when this particular dial was produced?  The dial side of the movement looks rather plain compared with what we are used to, with no calendar parts required: 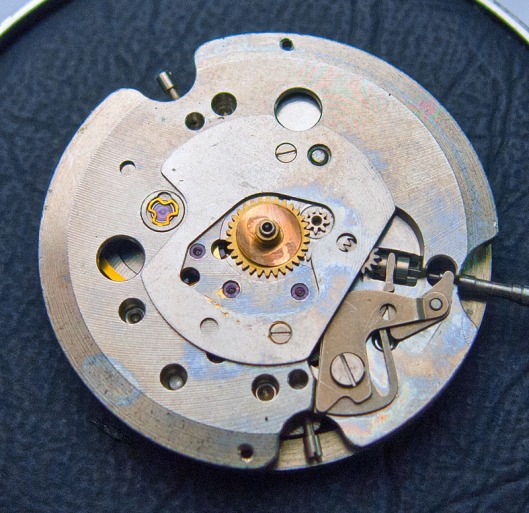 Just the central hour wheel and keyless works dominate the landscape.  Turning it over and removing the auto-winding mechanism, which was partly adhered to the movement with congealed grease 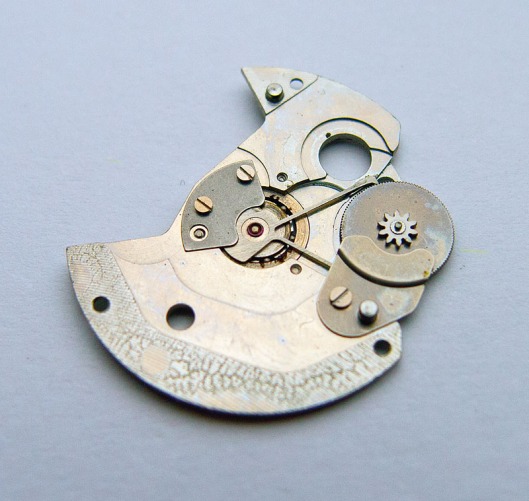 we see the the conventional architecture of the balance to the left, the ratchet wheel that sits over the barrel, lower right, with the third and fourth wheels largely hidden beneath the barrel and train wheel bridge.

If we now remove the ratchet wheel, we see the click-spring (nudged out of position) whose role it is to hold the power in the mainspring by slipping between the teeth on the ratchet wheel.  It is this that you feel clicking when you wind a watch.

Removing the barrel and train wheel bridge provides an unimpeded view of the barrel itself, the power source of the watch.

Disassembly, cleaning and reassembly went smoothly, so before we move on to the case, we can look at the part-reassembled movement with the click spring back in place

And with the rest of it together, wind in some power and off she goes:

Next up, the case, bezel and case back cleaned and primped and ready to receive a new crystal

the sourcing of which proved somewhat challenging because a proper fit requires not just the inner diameter to seat the crystal snugly onto the lip on the case, but the outer diameter too needs to provide a tight fit for the bezel.  A bit of trial and error, requiring the purchase of 3 or 4 different acrylic crystals, resulted in a Sternkreuz intended not for a Seiko but a Citizen, with an inner diameter of 31.3 mm and an outer of 33.0. 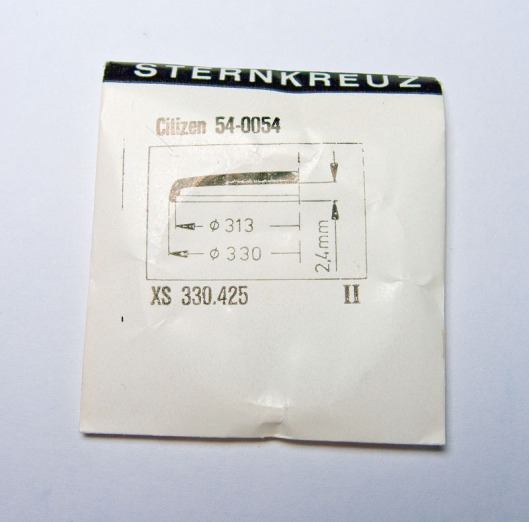 In the end, I had to take a little off the outer edge to get the bezel to seat properly

A final look at the dial side of the movement, now clean and tidy 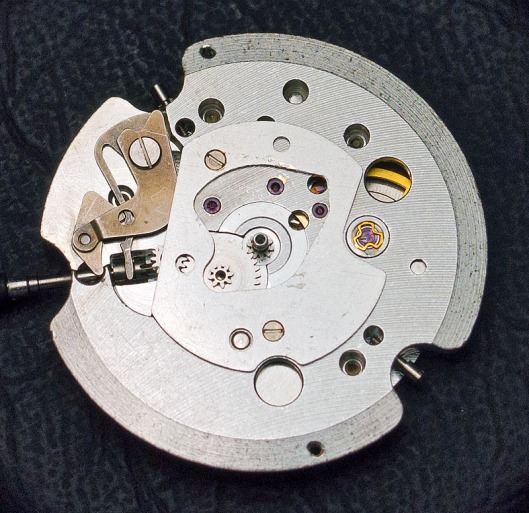 before fitting the, now relumed dial (performed by James Hyman).  This being a birth year watch, I thought I’d try something a little different (brace yourselves) 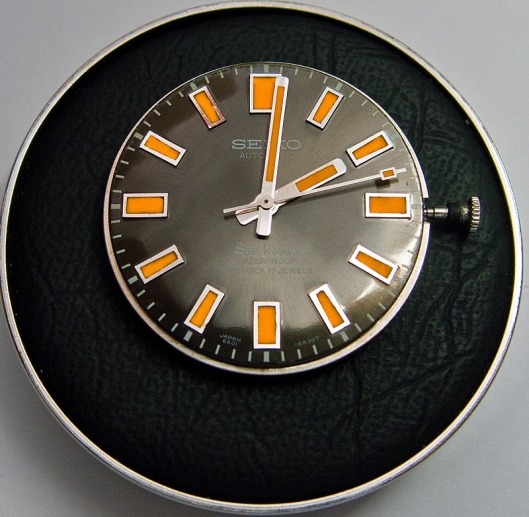 Pop it back into the case

At this point, it became clear the watch was running fast which prompted a closer look at the balance.  I had noticed when refitting the Diashock jewel that the spring appeared concave, suggesting that the jewel was sitting too low in the setting, no tension being exerted on the spring. Perhaps this was causing the reduced amplitude and fast running.

Not at all sure what might be causing this, I tried substituting a spare Diashock but with the same result.  Looking at the technical manuals for the 66 family revealed that the part numbers for the Diashock frames and springs are different to those used in the later 6xxx series movements.  So a delve into the parts drawer revealed a manual wind 66B movement which then donated its Diashock jewel and frame.  These I cleaned, oiled and fitted to the balance in place of the one that came with the watch.  Here’s a comparison of the incoming Diashock (left) with the outgoing (right):

You can see here how much higher the cap jewel sits in the frame in the correct part compared to the one designed for the later movements.  Here’s the jewel-less balance waiting to receive the Diashock 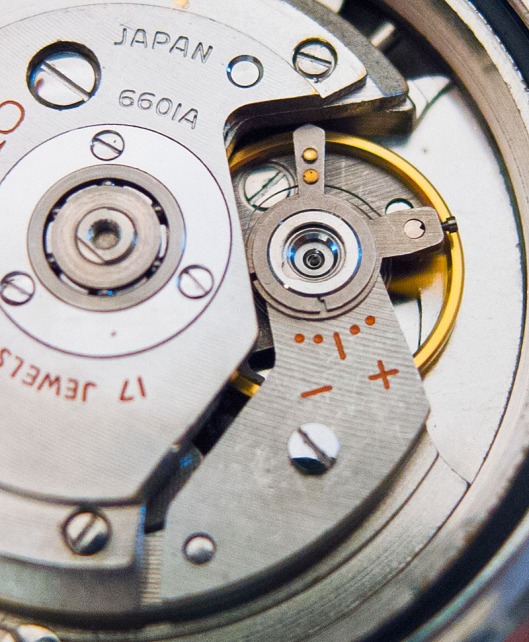 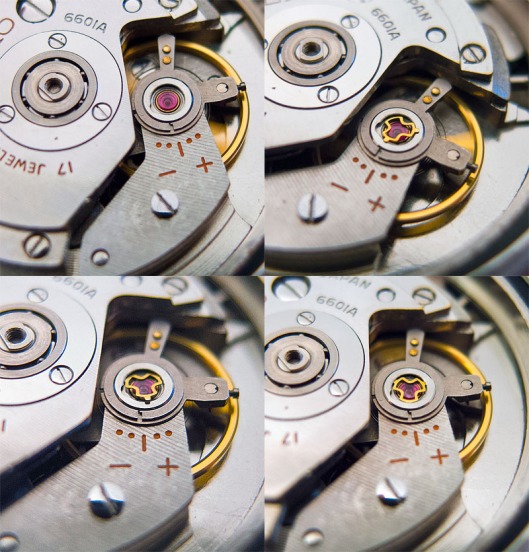 That’s about it for this one.  Let’s take a look at the finished watch: 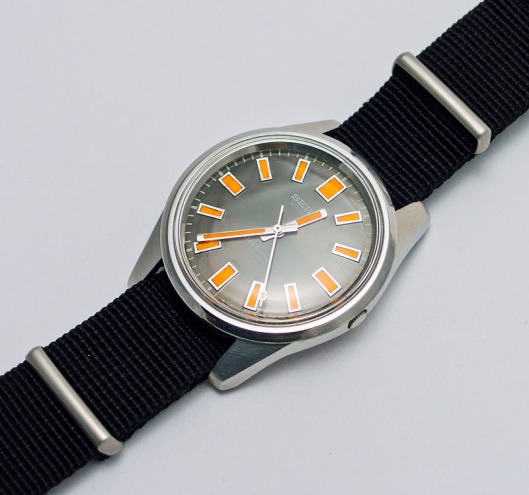 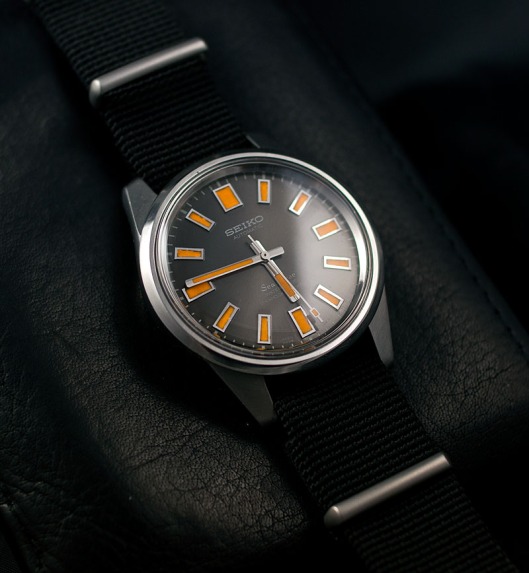 Apologies to the purists for this one.