Notwithstanding the apocryphal association of the term ‘to live in interesting times’ with ancient Chinese curses, we are nevertheless, living in a time ‘in which our history is so full, in which day by day brings us new objects of interest, and also, new objects for anxiety.’1 In such times, it is natural to seek comfort in the familiar, to immerse oneself in the welcome therapy that derives from sitting down and working at something not especially taxing or vexatious, but which carries the potential to brighten the mood. In that spirit, this present entry covers some familiar territory insofar as it concerns another member of the extended Seikomatic family and a movement on which I have worked on numerous occasions in the past. However, as well as being familiar, it is also ever so slightly left field, not actually branded as a Seikomatic but as a Weekdater Sea Lion M55.

Throughout the 1960’s Seiko used a number of case back designs to brand the water proof credentials of their water proof watches, ranging from the earliest Sea Horses, SilverWaves, Dolphins and Sea Lions to the settled Tsunami icon used to brand the diver’s watches of the 70’s, 80’s and beyond. The logic of these various brandings is not always entirely clear and in particular what constitutes a Sea Lion is somewhat opaque. As a breed though, the Sea Lion branding appears to have been applied exclusively to water proof dressier watches, but with no obvious consistency of design language, other perhaps than for the tendency of those models featuring both day and date complications to place the day window on the left hand side of the dial just below the horizontal connecting the 3 with the 9 hour marker. The example that provides the subject of today’s post is a 6206-9000 Weekdater from November 1966 and has its day window in this characteristic position.

The rather minimalist design of the dial with the blocky dial markers, plain hands and absence of minute markers, sitting in a circular case with rather stubby lugs is one used in quite a number of Dater and Weekdater designs from the period featuring either the 6205 or 6206 movements. Most of these watches used modestly-sized cases about 35.7mm in diameter but this particular example is unusual in having a supersized 37mm case.

As you may appreciate from the photograph of the watch as received, the dial and hands look to be in really excellent condition but the gold-plated case suffers from the usual acid erosion to the plating that completely compromises the aesthetic, rendering such watches of interest to me only to the extent that they offer the prospect of a successful transplantation to a steel case. 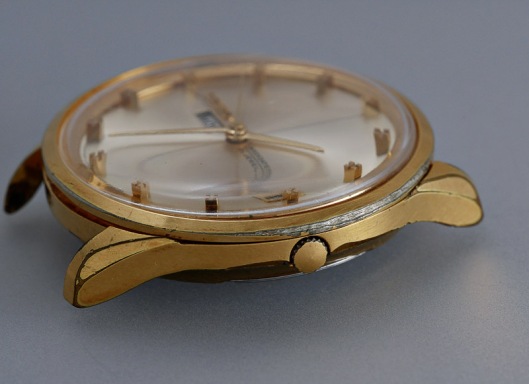 I have a soft spot for gilt dials and hands in steel cases and so I set this one aside in the hope that I might at some point stumble upon a suitable case to receive the innards. Patience paid off and a year or more after buying the watch, I happened by chance upon an auction for an empty old stock 37mm 6206-9000 case in steel, correct in every respect to the original barring the material of its construction. 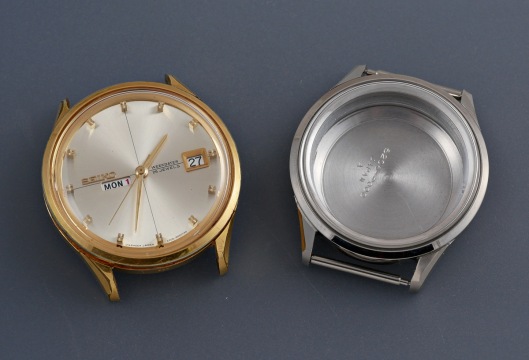 The movement fitted to my watch is the trusty 26 jewel 6206B, superbly attractive in its gilt finishing but in this example, obviously a tad on the filthy side. You can probably also make out from the photo below that the winding weight has partially detached from its centre. 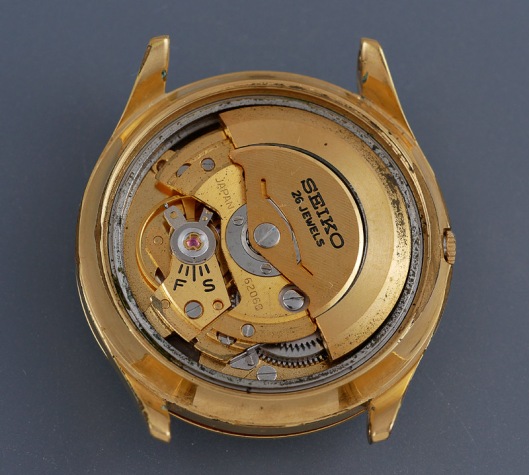 The absence of the case back gasket means that movement extraction is achieved simply by tipping the case over once the crown and stem have been removed. 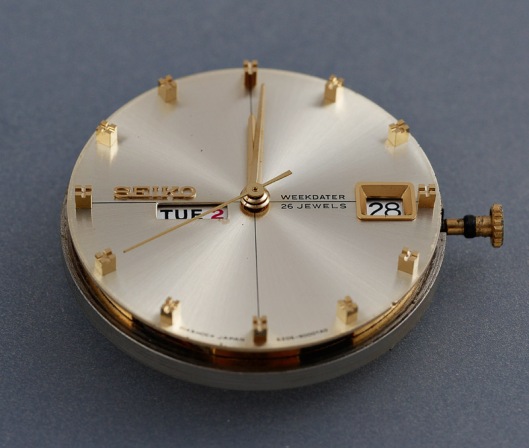 The steel case ring needs to be detached from the movement to provide access to the screws securing the dial feet and with that done and the dial and hands removed, we can see the calendar parts and observe the unusual presentation of the days on the day disk, oriented to ensure that they present correctly beneath that cock-eyed day window in the dial.

Removing the day disk reveals the fraudulence of the 26 jewels claim on the dial. Yes, there are 26 jewels but two of them serve no practical purpose, sitting within date jumper guard supposedly there to ease the passage of the day disk, but the absence of jewels on the opposing date dial guard reveals this for the cynical marketing ploy that it is. At least in this movement, the deception extends only to 2 jewels: in the higher tier day/date 6218 Seikomatics, 11 of the 35 jewels are there purely as decoration.

None of this should detract from the fact that these are lovely, high quality movements and I love them in spite of their slightly dishonest character.

The comfort zone represented by this project would naturally only be preserved if the watch itself served up no nasty surprises and indeed this one appeared to be doing just that. The view provided by the balance side was reassuring: 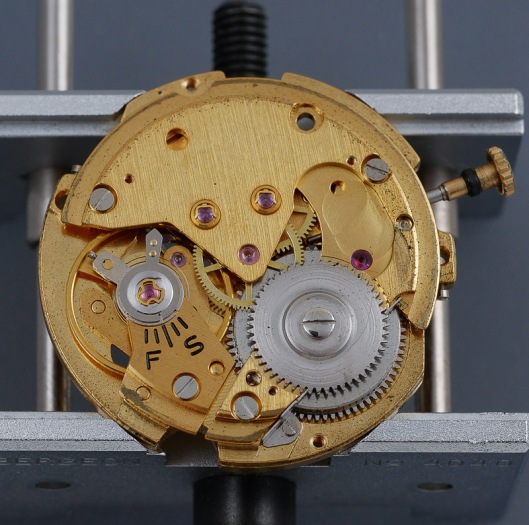 The only mild concern was the state of the fourth wheel bearing and the filthy condition of the escapement and in particular the pallet jewels.

With everything in such sound condition, there is not much to be gained from documenting the dissociation of parts as we’ve covered the architecture of this movement series on numerous occasions previously (see here and here, for example). Instead let’s jump ahead to the mainspring, whose condition was pretty typical – sound, but obviously well attired in moly grease – and which, following cleaning, installed without too much drama back into the now cleaned and lubricated barrel.

Assembly to the pre-escapement point followed without incident.

The slime banished from the pallet stones, Diashock settings lubricated and springs fitted and she’s off.

The figures look very good on the Timegrapher and so the calendar parts come next, starting with the train of gears that connect the cannon pinion to the day and date driving wheel via the minute, hour and intermediate wheels. The minute wheel independently also interacts with the setting wheel when the crown is pulled out to position 2. 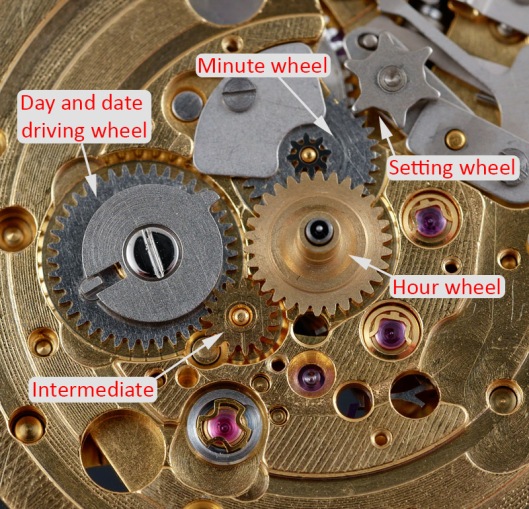 The day jumper goes in next, in preparation for the fiddliest part of the whole process.

The technical guide suggests fitting the date jumper guard next, followed by its spring but I prefer to fit the spring first (hazardous an operation as that might be), then the guard. 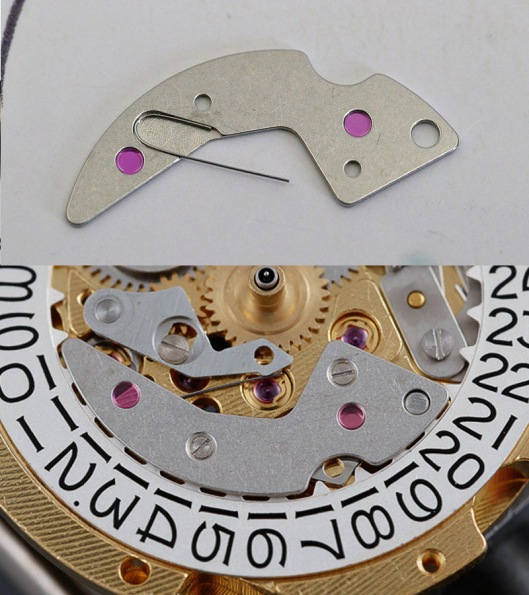 Fitting the day disk and its film washer reveals what a close relationship the underside of the day disk must have with the top of the date jumper guard. Hmmm, perhaps those two jewels play a role after all*

You can see in the photo above that the dial spacer is fitted and so we are all set to reunite the movement with its dial and handset.

There is something very appealing about the way in which these simple elements sit together.

As the movement is going into effectively a new case, preparations extend only to cleaning out the interior of the case and removing any debris that may have adhered to the underside of the acrylic crystal in the 50 years its been sitting around unused. We will also need to swap the stem over from the gilt crown to the steel crown that came with the new case. Before setting off on that course though, let’s take a gander at the super case back rendition of our celebrated Sea Lion:

The blue colour around the periphery of the case back is the remnant of the blue film applied to new case backs. Swapping the stem over is straightforward because the lip on the stem defines its effective length rather than the point at which the threaded part is cut.

In with the movement, a fresh case back gasket, greased crown gasket and we are almost there.

Interestingly, the case back gasket is an o-ring rather than a flat gasket, the former supporting a degree of greater confidence in the water proofing of the case and perhaps one reason for the use of the Sea Lion branding in making some sort of distinction between this and other water proof dress watches. The final part of the puzzle is a replacement winding weight sourced from a spare movement. 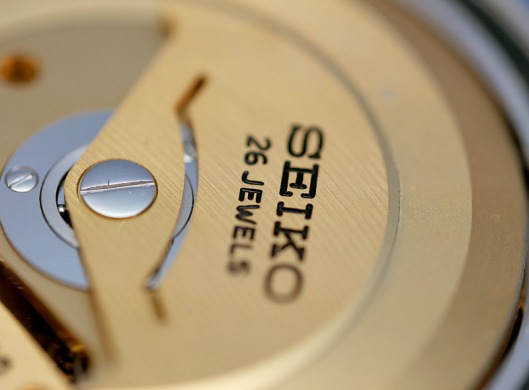 Well, this has proved excellent therapy. I feel becalmed to some useful extent. And the result? Well, I don’t know about you, but to my eyes, this is a simple object of beauty. 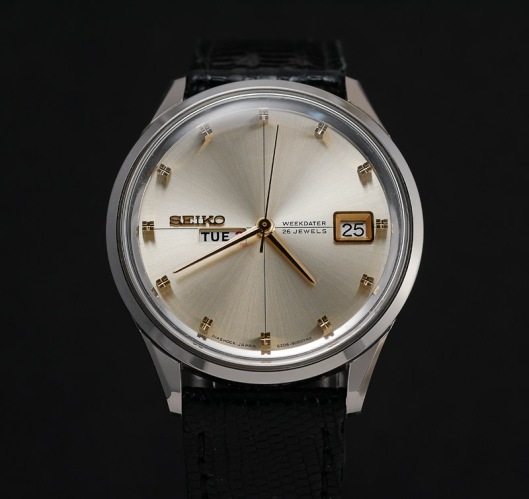 It is a watch whose styling is clearly vintage, whose dominant symmetric elements are beautifully offset by a slightly eccentric asymmetry that is unmistakably Japanese. Bravo once more Seiko. 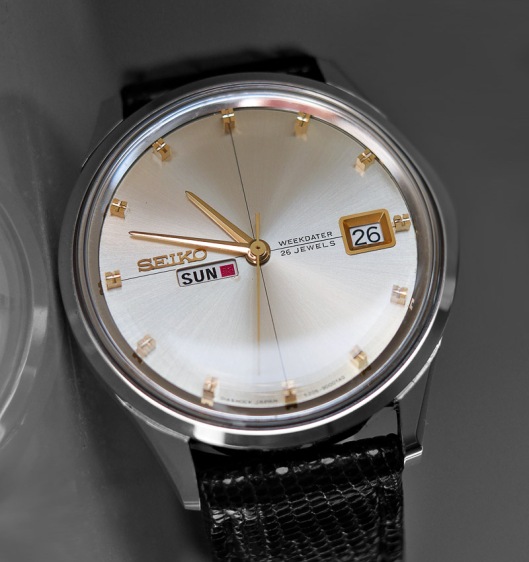 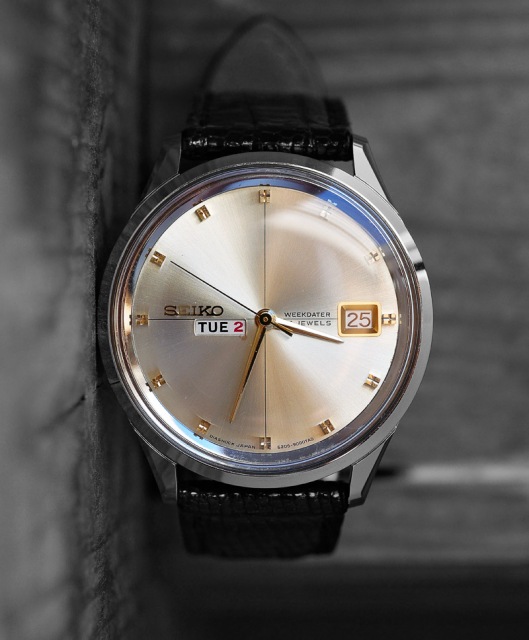 *Nope. It is not unreasonable to theorize about the potentially active role played by jewels sitting in the midst of a surface over which the day disk moves. The jewels do actually sit slightly proud of the guard and if the underside of the day wheel makes contact with the surface of the jewels then perhaps their coefficient of friction is lower than that of the metal surface of the guard. Any benefit though will only manifest for the hour or so during the day that the day wheel is progressing on its journey but given that the movement will also be having to contend with the resistance offered by the date wheel during its transition, and whose passage is not eased by any jeweling, I have my doubts that there will be any noticeable effect at all. It is also worth observing that if this was genuinely something conceived by movement designers rather than bean counters and marketeers, then why not implement the same approach in their more sophisticated higher end movements of the period such as the 45, 51, 52, 56 and 83 series.

1 A paraphrasing of part of a speech given in 1898 by The British statesman Joseph Chamberlain, father of the British Prime Minister, Neville Chamberlain.

28 thoughts on “The comfort of familiarity: A Seiko Sea Lion Weekdater from 1966”