Intermission concluded and we rejoin battle, the movement parts having emerged fresh from their bath.  I always clean the mainplate and balance with the latter fitted to protect it from potentially traumatic interactions with other parts during the rather vigorous agitations of the cleaning machine.  In the photo below, we have a nice view of the balance Parashock end piece free from the spiral spring jewel.

The reconstruction begins with the two mainplate Profix settings, the inner stem, clutch wheel and setting lever, the latter secured in place by the setting lever spring that I’ve fitted to the opposite side.

The yoke and its spring are placed into position next (below, left) and, having eased the spring into position, it is safely capped off with the yoke guard (below, right).  The first potential spring-related calamity avoided.

The date corrector lever comes next followed by its spring, somewhat less fiddly to fit.

The whole shebang is capped off with the date corrector spring. 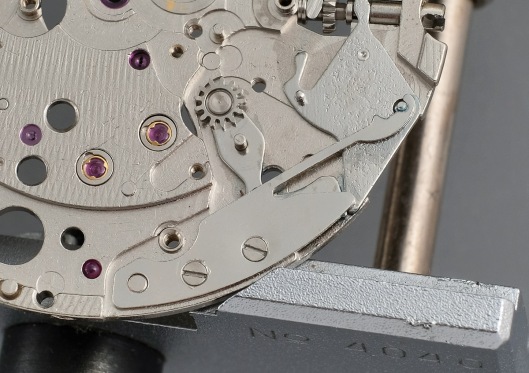 We can now turn the movement over and fit the centre wheel and its bridge.

We need to start thinking ahead to the barrel and train wheel bridge which still needs its winding rotor post fitting.  This is accomplished by pressing it into place using a jeweling tool.

With that done, we can take a look at the sweep second pinion jewel mounted to the rear of the rotor post. 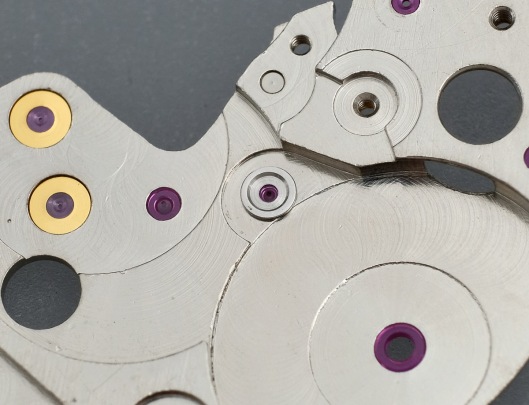 If we turn the bridge over, we can see the threaded part of the replacement rotor post, ready for action.

As is becoming increasingly common in my recent experience, I find myself once again having to wind a mainspring left-handed into a right-handed mainspring winder.

With the mainspring fitted to the barrel, and the train wheel bridge ready in the wings, we can continue to assemble the balance side of the movement.  The next job is to fit the stop seconds lever and its spring, making sure that the base of the spring is touching the centre wheel bridge. 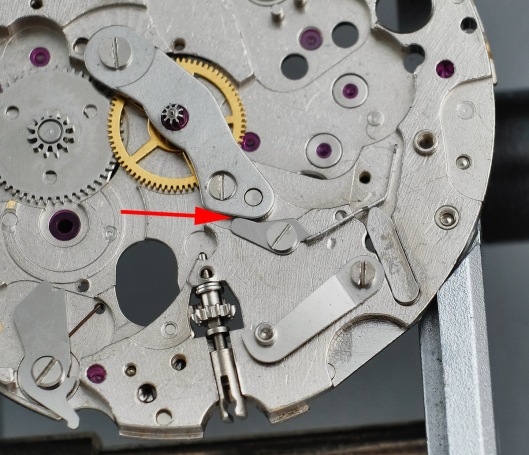 The scene is set for the gear train:  the barrel (having first set the click and its spring), the reduction gear, double third wheel, fourth wheel and escape wheel.

The barrel and train wheel bridge finds its way into position with barely a murmur and we then seat the two pawl winding wheels as well as the intermediate winding wheel.  By way of a cautionary note to any readers who may find themselves working on this calibre in the future, three screws, two long and one short, secure the bridge to the main plate.  You must take care not to fit either of the long screws into the hole adjacent to the stem because if you do so, the screw will protrude through to the rear and dislodge the yoke.  This is where the short screw belongs! 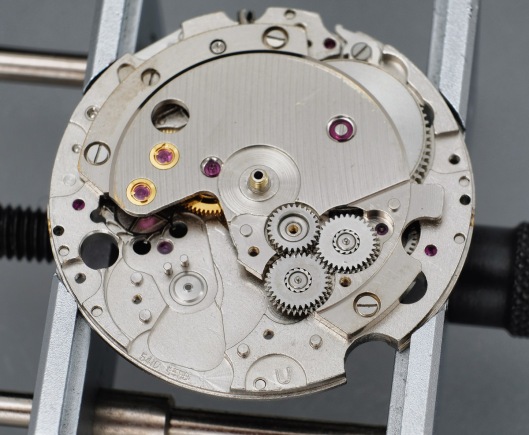 The intermediate winding wheel is secured into place with its screw and the automatic train bridge fitted. 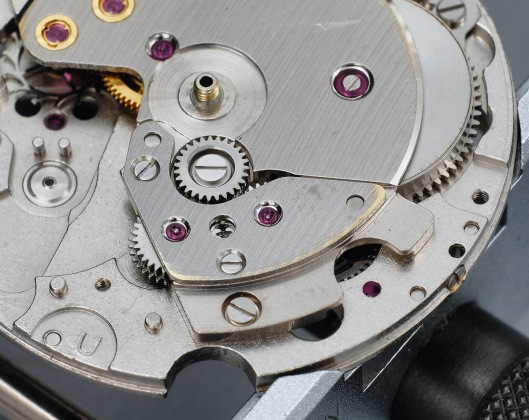 We have reached the point where we can contemplate breathing some life back into this old movement.  Two Parashock settings, one pallet fork and its bridge later, the balance eased back into position, a couple of winds of power, and the movement springs into life. 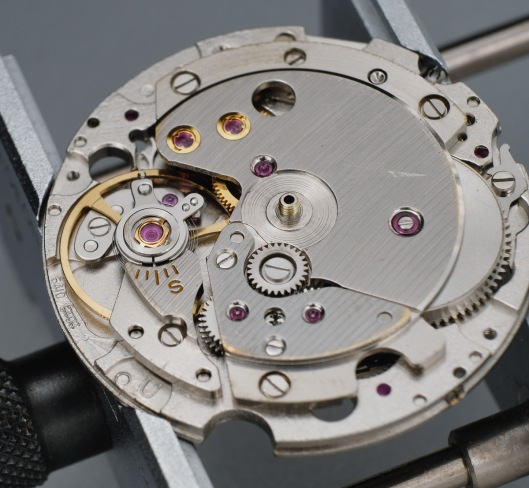 If we now turn the movement over, we can reassemble the rest of the dial side components, starting with the cannon pinion, minute wheel and its guard, the date driving wheel and the intermediate date wheel.  This last component is secured into position with a left-threaded screw, identified as such by its black-anodised head. 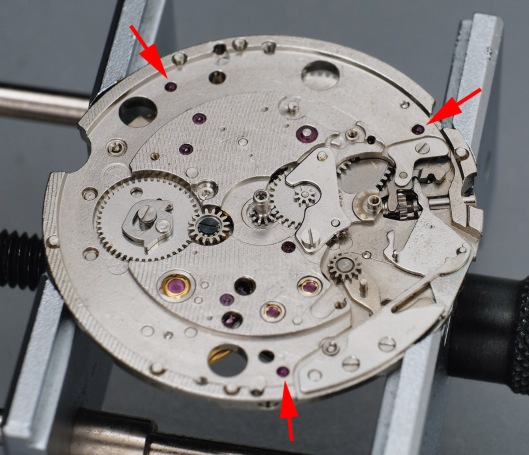 The three arrows in the photo above indicate the location of three spherical jewels whose role is two-fold:  they support the date dial and notionally therefore contribute to a reduction in the overall drag as it rotates from one date to the next; more importantly, they allow the manufacturer to boast of 33 jewels on the dial rather than 30.  The 5203 day/date movements that I’ve been using to provide spare parts are 27 jewel movements, the difference being accounted for by a steel bearing used for the upper barrel arbor hole and upper and lower steel bearings supporting one of the pawl winding wheels.  Interestingly, in place of the three spherical date wheel jewels in the 5410, the 5203 use three equivalently sized steel ball bearings. So perhaps they have a real function after all.

The rocking bar whose role is to act as intermediary between the clutch wheel and all setting actions, quickset included, is also secured into place using a left-threaded screw.

One of the fiddliest operations is securing the rocking bar spring and date jumper spring.  They sit back-to-back with the latter in a state of unsecured tension for as long as it takes for me to fit the date dial guard.

The date corrector pinion, finger, spring and guard complete the puzzle on the dial side of the movement, barring the hour wheel and its film washer.

The hour wheel and film washer come next before placing the dial back into position.

The dial still needs a bit of a clean, but I wanted first to check that all of the calendar functions worked correctly before sprucing it up prior to refitting the hands.  That will wait until the movement is back in the case but before we can do that, we need to refit the winding rotor to the new post.

In the meantime, I’ve cleaned the case and crown, greased the crown gasket, fitted the crown and rotated it so that its male coupling is aligned correctly to receive its female counterpart when I ease the movement into the case.

A little bit of jiggling is required to get the movement to seat correctly. 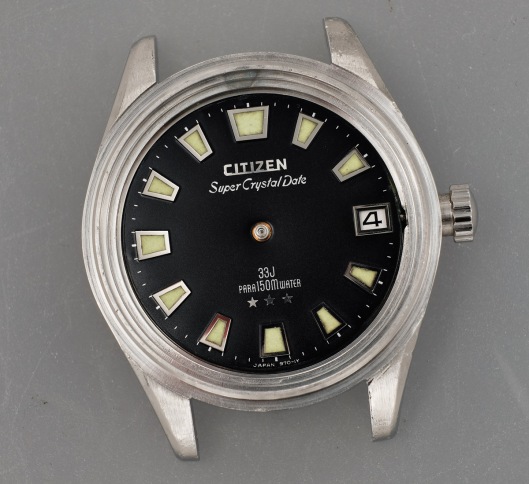 And with that done, we can refit the hands.

You’ll have noticed that the hands have aged somewhat differently compared to the dial markers, the former turning a creamy beige, the latter retaining their original greenish hue.

As I suggested at the start, information on and availability of spare parts for these vintage Citizens is very thin on the ground.  I was able to find almost no useful information at all about this particular model and was assuming somewhat optimistically that the crystal fitted to this model would be similar to those fitted to the more common contemporary Citizen 150m divers watches, such as the 62-6198.  My measurement of the diameter of the original crystal yielded a value of 31.8mm which is the same as that of the other divers models.  Fortunately, I managed to find a seller on eBay with stock of what they described as exactly the same size and look as the original 150m Citizen crystals but made of sapphire rather than tempered mineral glass.  Given the lack of alternative options, I had ordered one of these shortly after receiving my watch and with it in hand, we can assess to what extent it correctly mimics the original. 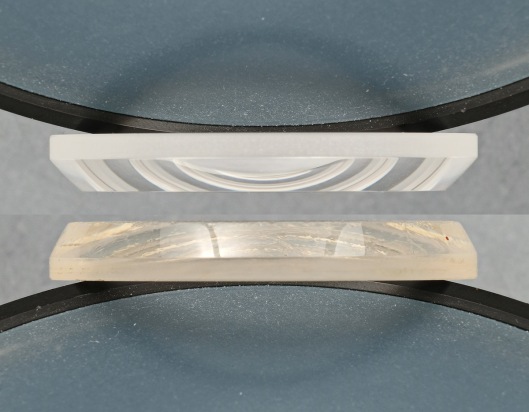 Obviously, the new sapphire is pictured top and the original glass below.  The good news is that the base of the new crystal has the correct dimensions and its perfectly flat top correctly mimics the original; the potentially bad news is that the taper of the sapphire is shallower than the original which means that the diameter of the flat top is smaller.  My numerous unsatisfactory experiences in the past with sapphire facsimiles of Seiko domed crystals meant that I was braced for the usual issues of odd optical distortions and chronic internal reflections obscuring the view of the dial.  But as this was my only option, I pressed on with a reasonably open mind.

The photo above shows the crystal in position, fresh outer gasket fitted but the bezel still waiting its turn.  This photo shows the crystal in its absolutely best light, aided by some artful photoshoppery to reduce the appearance of haze produced by internal reflections.  What you should notice though is that the diameter of the flat top slices through the hour markers which means that you cannot get an unobstructed view of the whole dial when viewing the watch from immediately above.  In the next photo, I’ve fitted the bezel and a strap and you should see more clearly the issue I have with these domed sapphire crystals.

It almost appears as though a mist is rising from the surface of the dial.  I really don’t like the look and at this point felt that a great deal of what I have always liked about this model was being undermined by the havoc that the crystal was playing with the view of the dial.  I didn’t seem to have a choice though because what are the chances of finding a correct original crystal?  Vanishingly small, I thought, but that did not stop me having a nose around Yahoo Japan and eBay before stumbling upon an auction for an original Citizen Crystal for Divers, sealed in its original packaging, with part number 54-51810.  The seller was in the UK but this was an auction with one bid already at £75 with several days to run.  I bided my time, waiting until 15 seconds before the end of the auction before lobbing in a £90 bid, and secured my prize for £77 plus postage.  I know, I know, this seems like a lot of money for a crystal but with so much time and effort invested in this watch, I wanted to top it off properly, allowing it to display its assets without impediment.

Out with the sapphire and in with the new old stock part. 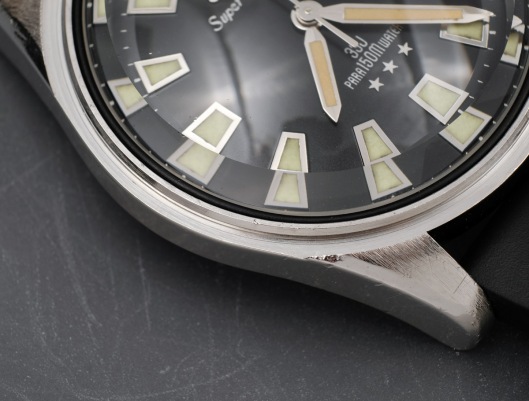 You can see from this angle that there is still plenty of optical chicanery but it is far less extreme and importantly, the steeper taper of the sides means that the dial is viewable in its entirety from a perpendicular vantage point.

Before wrapping this one up, I should mention that I had to break and enter once more to tighten the cannon pinion; the watch was losing a minute or so each time it transitioned though the date change process, a sure sign of a slipping pinion. Two or three iterative tightenings solved the issue completely, and I have been left with a watch that appears to be keeping time as well as almost any vintage mechanical watch I own.  I’ve been wearing this watch for the past 10 days since completing it and it has gained 13 seconds in that time.

Let’s finish with two more views of that gorgeous dial, comfortably the equal in charisma of anything Seiko was producing at the time.  The first, an oblique perspective: 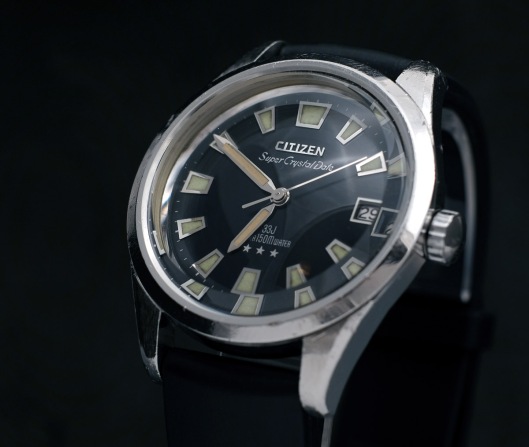 In many ways, this is a perfect watch:  at 37.5mm diameter, crown excluded, it is, for me absolutely hitting the sweet spot; its dial and handset are wonderful; the inner dome, flat top crystal lends a super additional three-dimensionality to the dial; its movement is sophisticated and highly specified, with hand-winding, seconds hacking and quick-set date complication; it appears to be fantastically accurate; and its beaten up case means there is no reason at all to baby it (ok, yes, the crystal is vulnerable, but I’m prepared to take the risk!).  I don’t see Citizen elbowing Seiko from my affections, but I am very pleased indeed to have made its acquaintance.

For those of you interested in learning more about the vintage Citizen universe, I heartily recommend you take a look at vintagecitizenwatches.com and sweep-hand.org.