Grand Seiko. A 55 year old heritage of fine Japanese watchmaking but only now starting to make an impact as a world-wide prestige brand. Although its mention can still raises the hackles of stick-in-the-mud conservatives in the WIS community, the Grand Seiko is much more widely accepted these days among the cognoscenti as a watch to aspire to in the upper-mid region of the horological spectrum. Upper-mid will mean different things to different folk depending on your perspective and the size of your bank balance. So my reference here to upper-mid does not mean high end – that is something else entirely. I am referring to the part of the market that would make most folk question their priorities if seriously contemplating how to spend their disposable income. Having said that of course, you only need to take a look in the window of a typical high street jeweler to appreciate that there does in fact appear to be a reasonably vibrant market in watches whose cost would pay for a nice kitchen or a two week holiday for a family of four in a nice villa in Tuscany.

Anyway, I fear I am digressing somewhat from the point. In 1960, Seiko introduced the first Grand Seiko, the 3180, a hand made, Seiko certified chronometer available in gold or platinum and fitted with a hand wound 18000 bph 25 jewel movement featuring tadpole regulation and with a specified rate of -3 to +12 s/day. 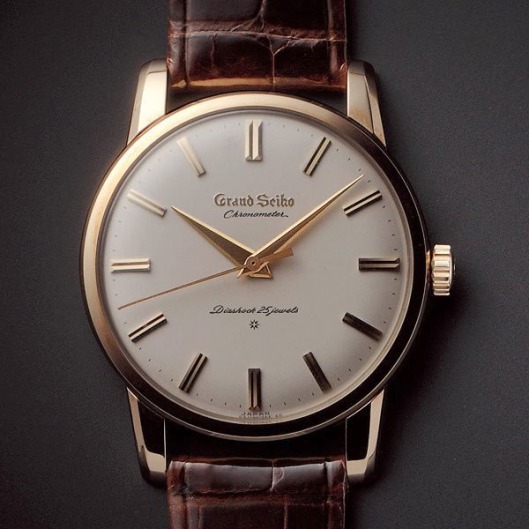 The second generation 430/43999 Grand Seiko Chronometer appeared in 1963, featuring a stainless steel case and screw down case back with much improved water resistance. Its movement, a development of the 3180, incorporated a date complication and a jewel count elevated to 35. That watch underwent small revisions to the movement during its 4 year lifespan, initially a model number change to 5722A (but with no other obvious differences from the 430) and then a more substantial revision in the 5722B with an increase in beat to 19800 bph and with the tadpole regulation changed to rack and pinion. All of these watches were produced by the Suwa division but were joined in 1966 by the Daini produced 44GS, a development of the 4420A King Seiko Chronometer of 1964. So by early 1966, the Grand Seiko line comprised two manual wind chronometers (in spirit at least, given that the Japanese were excluded from eligibility for COSC certification): the Self-Dater 5722 and the no date 44GS.

In July 1966, the 62GS joined the range, having been launched in two flavours: the 6245-9001, with a 35 jewel automatic movement featuring a date complication; and the 39 jewel 6246-9001 whose movement sported both day and date complications. This new watch was pitched at the high end of the three model range and certainly made a supremely confident and distinctive visual impact with its mirrored, multi-faceted case, Grand Seiko’s “Zaratsu” polishing and bezel-free case construction providing an unimpeded view of the beautiful dial and handset.

The 62GS was marketed at the time as featuring the first Grand Seiko automatic caliber.  Although the movement was certainly rather special, it was not in truth a new design but rather the end result of a long process of refinement of the 62 series movements dating back to the 603 calibre fitted to the early Seikomatic watches dating from 1960. Indeed, both of these 62GS models had been available as Seikomatic Chronometers since mid 1965 running at an elevated beat rate of 19800 bph and their transformation into Grand Seikos coincided with Seiko’s decision to create a new Grand Seiko standard in time-keeping, having been thwarted in their attempts to have these fine watches recognized as chronometers in the Swiss tradition.   That standard improved slightly over the chronometer certified rate of the Seikomatic equivalents with the promise of an average daily rate range of -3 to +6 seconds per day.

This somewhat extended preamble brings us to the subject of today’s post: a Grand Seiko 6245-9001 dating from July 1968. The production date makes this one of the very last of the breed to come off the production line. I found this example about a year ago and with it in hand after a nervous wait for it to be delivered, I certainly had no regrets: it made an excellent first impression.

The case and case back looked remarkably unworn for its age and the dial and handset equally nice.

A quick peak inside though revealed some corrosion around the case back gasket mating surface – not uncommon with this type of gasket arrangement where the gasket does not sit in a deep groove but rather perches on a ledge (a similar issue can afflict contemporary Rolex DateJusts for example).

The movement looked sound though, albeit on the grubby side. Its tarnished state was a bit of a surprise because the interior of the case back suggested that the movement had been serviced as recently as 2012. Removing the rotor only serves to reinforce that impression: this does not look like a movement that was service 3 years ago. One issue I’ll come back to later is that the Diashock spring serving the balance cap jewel appears to be sitting very flat, suggesting it is not exerting much in the way of pressure against the end of the balance staff.

The star of this initial appraisal is undoubtedly the dial which was in fantastic condition, only marred ever so slightly by a tiny flaw near the 5 marker. The hour markers themselves still retained a very good polish with minimal tarnishing and the classic beveled sword hands looked in very good shape.

A slight surprise greeted me though, having removed the dial and hands. I was fully expecting to see a calendar layout similar to that of the 395 date-only movement I used as the basis of the 62MAS project described here. Instead, it is clear that the 6245A is essentially a 6246A without the day disk.

Everything, including the day and date driving wheel, day jumper and spring and separate date dial guard and date jumper guards, are all present and correct. The only difference to the 6246 is the absence of the four jewels on the dial guards (all four of which are of questionable value in any case) and this then accounts for the 35 vs 39 jewel count difference between the two movements. Given that the 6246-9001 was priced at 38,000 Yen in 1966 to the 6245-9001’s 35,000 Yen, we have an interesting insight into the value to the marketing department of those extra 4 jewels and the addition of a day disk.  The fitment of the day jumper and spring is particularly curious, their role in this movement completely redundant and required the fitting of an extra washer mounted on top of the hour wheel against which the tip of the jumper rests. 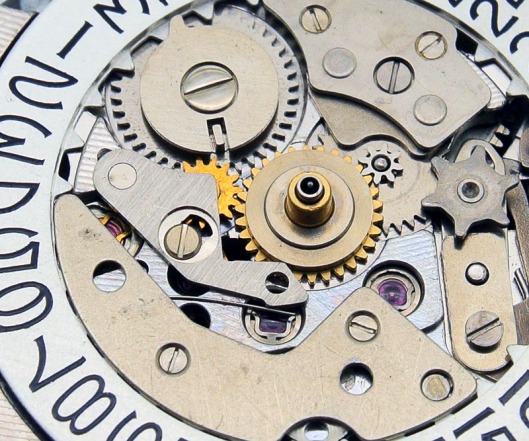 We’ve seen the essential architecture of this movement series on numerous occasions before and so I’ll just pause during its disassembly to point out notable features. For starters, on the train side of the movement, with the autowinder still in place, we see that this higher end version of the 62 series movement benefits from very nice radial decoration on the autowinder framework together with gold highlighted text identifying the movement model number and its individual serial number. You can also see the rack and pinion fine adjuster on the balance which makes regulating the watch a great deal easier (not to mention less hazardous) than prodding the regulator arm hither and thither.

With the automatic framework and balance removed, we see one of the key distinguishing features of this movement compared with, say the 35 jewel 6218 we’ve met recently: jeweled barrel arbor bearings, one in the barrel and train wheel bridge

and, of course, another in the main plate.

With everything cleaned, we start as usual with those pesky Diafix settings, first the two in the barrel and train wheel bridge

a view of which which also gives us an opportunity to admire the now clean barrel arbor jewel. Next the two Diafix settings in the main plate together with the setting components. You’ll notice too that I managed to lose one of the Diafix springs and had to salvage a replacement from a spare 6206 movement. As with virtually every part that I lose, I am confident that I will find it at some point in the future whilst on my hands and knees with a flashlight looking for another, more recently lost component. Herewith one clear benefit of rarely vacuuming the carpet immediately around my workspace!

The mainspring next, a clean followed by barrel lubrication and this time using Moebius 8201 both for the barrel walls and spring. I’ve been experimenting with various combinations including braking grease on the walls and either 8200 or 8201 for the spring top and barrel floor but this time I’ve simply followed the Seiko technical document recommendations of the period: molybdenum impregnated grease only. I will continue to experiment with braking grease though to get the right balance of slippage vs. power reserve. On this particular watch, with moly grease only I have been getting about 45 hours power reserve following a few days wear (we are getting slightly ahead of ourselves though).

The next task is to install the balance but first I need to inspect the cap jewel and get to the bottom of why the Diashock spring was sitting so flat. The part number for the Diashock cap jewel (upper) is 011205 and is common to the 6215A and 6245A, 6216A and 6246A, all variants of the 6218 as well as the 7625 but not to any of the other 62 series movements. Those use a shallower Diashock hole jewel frame and need a shallower cap jewel. Let’s take a look at the cap jewel fitted to my watch (right) and one harvested from a spare 7625 (left): 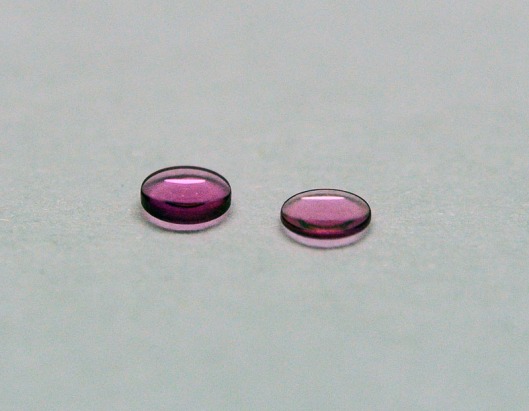 The difference is clear at this level of magnification but it is equally clear that the watchmaker who serviced the movement in 2012 (or at an earlier service) installed an incorrect cap jewel and then failed to notice the detrimental effect this will have had on the performance of the movement. Perhaps poor time keeping post-service was the reason the previous owner traded in this watch. Anyway, with the balance installed and the correct jewel fitted, we can wind in some power and let the watch run for a bit before proceeding further.

In the meantime, a light clean to the case is all that is required followed by the installation of a new crystal. 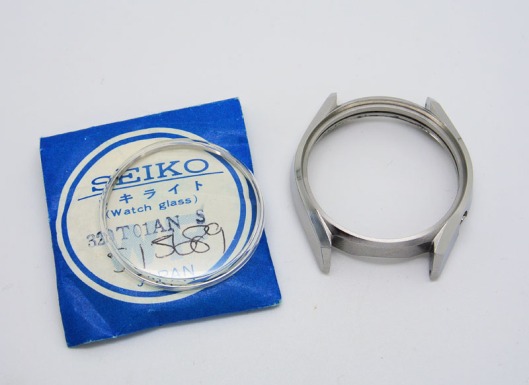 With that done, the calendar parts of the movement come together

before reuniting with the dial and hands and preparing to install back into the case. 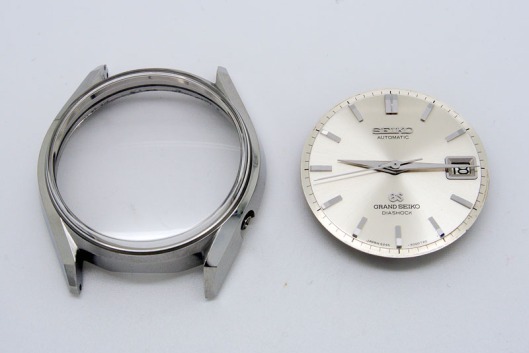 The view below of the movement in situ is certainly undermined to an extent by the corrosion to the gasket mating surface and the to a lesser extent by some stubborn staining to the movement ring but the movement itself still looks rather splendid, particularly given its age and the fact that, in spite of the excellent external condition of the watch, this is a watch that has been well used.

Surprisingly, the case back gasket for this watch is an o-ring rather than a flat gasket

and this goes some way to providing reassurance that in spite of the pitting to the gasket surface on the case, the watch should be more than adequately water resistant.

These are interesting, lovely watches, unarguably fine and very high quality but whose origins can be traced back through the Seikomatic line to that original rather more humble first Seikomatic of 1960 and whose base movement is also shared with more toolish watches such as the 62MAS.

For me, the star quality of the watch shines through in the fantastic case design, with its multifaceted surfacing somehow serving as a premonition of modern stealth aircraft designs, and the truly eye-popping loveliness of the dial and handset. 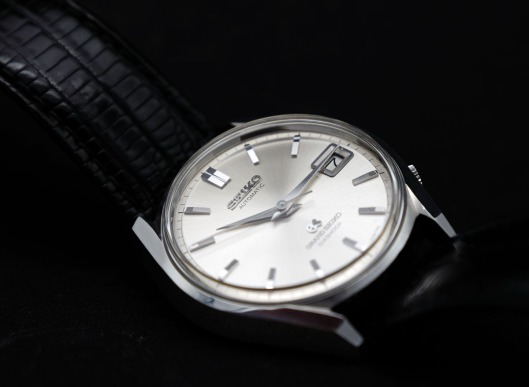