From the mid-1980’s through to early ‘90’s, TAG/Heuer sold a range of rather nice 200m divers watches fitted with somewhat modestly specified quartz movements from ESA.

These 1000 series divers were available in ladies and gents styles, and featured 60 click uni-directional bezels, Brevet-made cases and were available in a wide range of finishes, including straight stainless, mixed steel/gilt, all-gilt and PVD.  The cases however were not unique to Heuer, being available, presumably off-the-shelf, to other brands, some well-known such as Squale and Aquastar and some much less so.  Amongst the latter group, Hellas watches are a brand about which I can find nothing at all other than a suggestion that they might have been sold through mail order outlets in North America in the early 1990’s.  Two new old stock examples of these Brevet cased divers found their way into my possession recently, one of which a really rather lovely ladies watch needed only a fresh battery

and the other, a mid-size gent’s watch, which, in spite of the fact that it was patently unused old stock, suffered from a number of faults requiring attention.  With the comically terrible steel bracelet removed and replaced with a caoutchouc strap from Cousins, we get our first view of this attractive, modestly-proportioned watch.

The dial is particularly nice, with tritium markers still with plenty of life left in them.  The acrylic crystal, complete with cyclops over the date window to aid those long of sight, a lovely feature.  The not-so-good was a movement which kept stopping, a stem clearly no where near perpendicular to the crown and which appeared to be too short in any case, making it all but impossible to return the crown to its rest position from either the time or date-setting positions.  First job then is to remove the case back and take a gander at the movement, an ESA 536.121.

This view confirms that this is basically a Heuer 980.013 without the branding (the later TAG Heuer branded versions may have been fitted with a different movement, possibly a 555.115).  My first strategy was to assume that the stopping movement was related to the wonky stem but with the crown and stem carefully realigned, and refitted the problem persisted.  I resolved at this point, with nothing much to lose, to service the movement, both in the interests of fixing a problem possibly caused by a grubby movement but also because this presented me with the opportunity to service my first quartz movement.  So, movement out once more, battery released 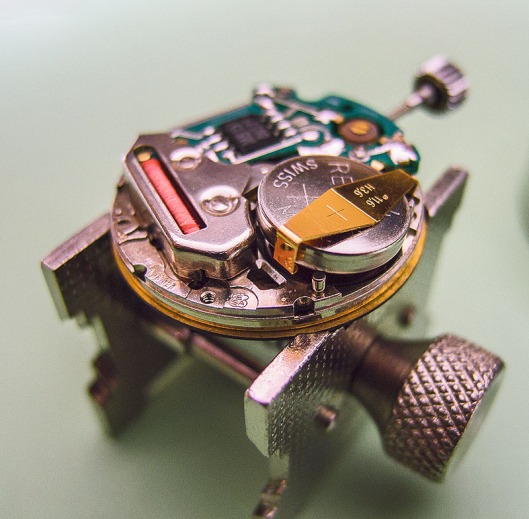 hands aligned to 12 sharp to aid their removal

and with the dial off, we get a view that should be familiar to anyone who has gawped at the calendar side of an automatic ETA 2836-2.

The 2836-2 and indeed the quartz 536.121 are both day/date movements but in this application, with no need for the day disk, the day corrector wheel is surplus to requirements and therefore also missing.

We can also see that, although the movement looks clean enough, most of the components are covered in a dried oil mist, probably the result of the watch having been in storage for 20 years or more without attention.  With the rest of the calendar parts stripped off, we can flip the movement over and continue with the disassembly.  The first step is to remove the coil cover 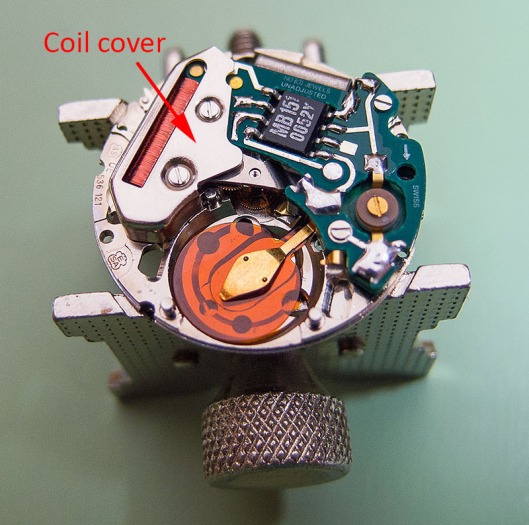 revealing the electronic module and the key components which regulate the rate of the movement.

Next the electronic module comes off, having first removed four retaining screws, 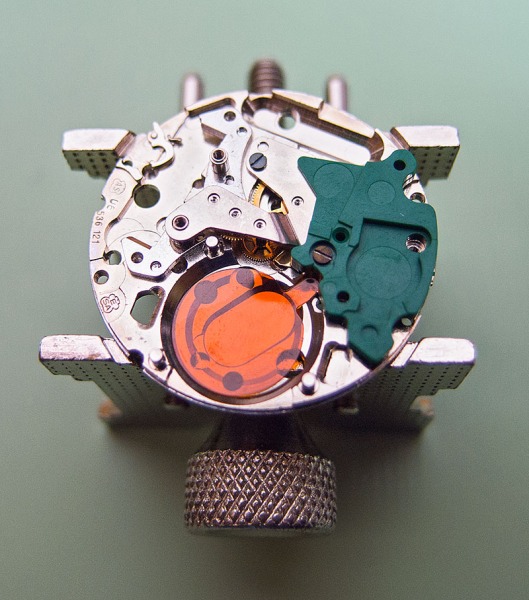 followed by what I believe ETA call the electronic module distance piece, which presumably is just an insulating spacer 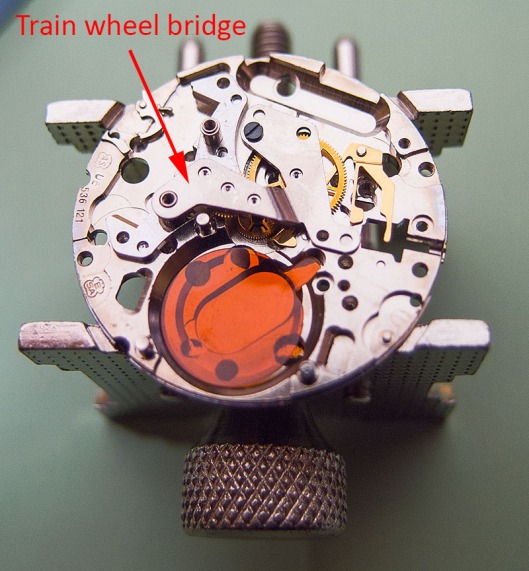 We can now access the train wheel bridge which provides the framework for the train wheels to transfer power from the stepper motor, driven by the coil, to the hands of the watch.  The stepper motor comprises the stator made from soft iron and which houses the rotor or armature, which is a permanent magnet.

Each pulse from the coil magnetizes the stator, creating a magnetic field which opposes that of the permanent magnet in the rotor, causing it to rotate by 180 degrees.  The next pulse, whose polarity is now reversed, completes the process by inducing a further 180 degree turn of the rotor.

The rotation of the rotor is transferred via the intermediate wheel to the second wheel, on whose shaft is mounted the second hand.  The second wheel transfers its power to the third wheel, whose pinion on its reverse protrudes through the mainplate transferring power to the minute wheel mounted on the calendar side of the movement.

With the watch completely dissembled

we are ready for cleaning in the ultrasonic bath, prior to reassembly, which I’ll gloss over as it’s just the reverse of what has preceded.  And with no jewels to attend to, lubrication was somewhat more straightforward than with many of the automatic movements I usually deal with.  However, as is often the case with me, there was one final fly in the ointment:  the problem with the stem I mentioned at the start I thought I’d sorted by replacing the stem with a spare I had hanging around from an old 2824.2 project.  But with the watch back together and seemingly running again, and I might add, with the stem functioning correctly, the watch kept stopping.  Initially, I assumed I had somehow missed something during the service but the clue to the source of the problem emerged when I found that the watch would run quite happily with the crown unscrewed, but would stop with it screwed down.

Perusal of Cousins’ site revealed that the 536.121 should use the ETA 2850 stem rather than the 2801 stem that I had used.  A closer look at the 2801 stem (on the right, below) sitting next to the 2850 stem (left) highlights some subtle differences, small enough not to impact on the running of the watch with the stem in a neutral position, but with the crown screwed in, I suspect the stem was pressing against the movement pushing it against the inside of the case and stopping it.

So, with all now back together, a last final couple of shots of the completed watch, now running as I was hoping it would have been when originally received! 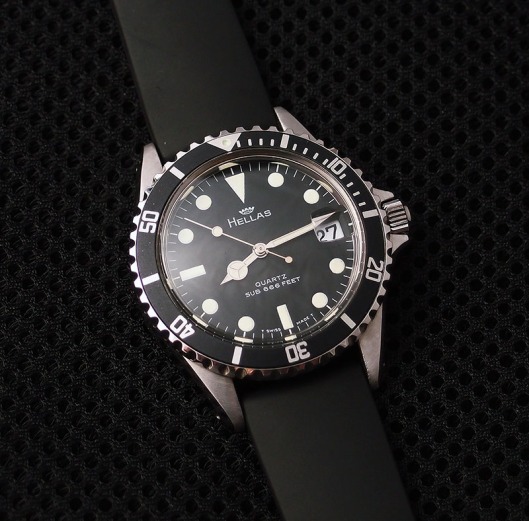 14 thoughts on “A Heuer pretender”